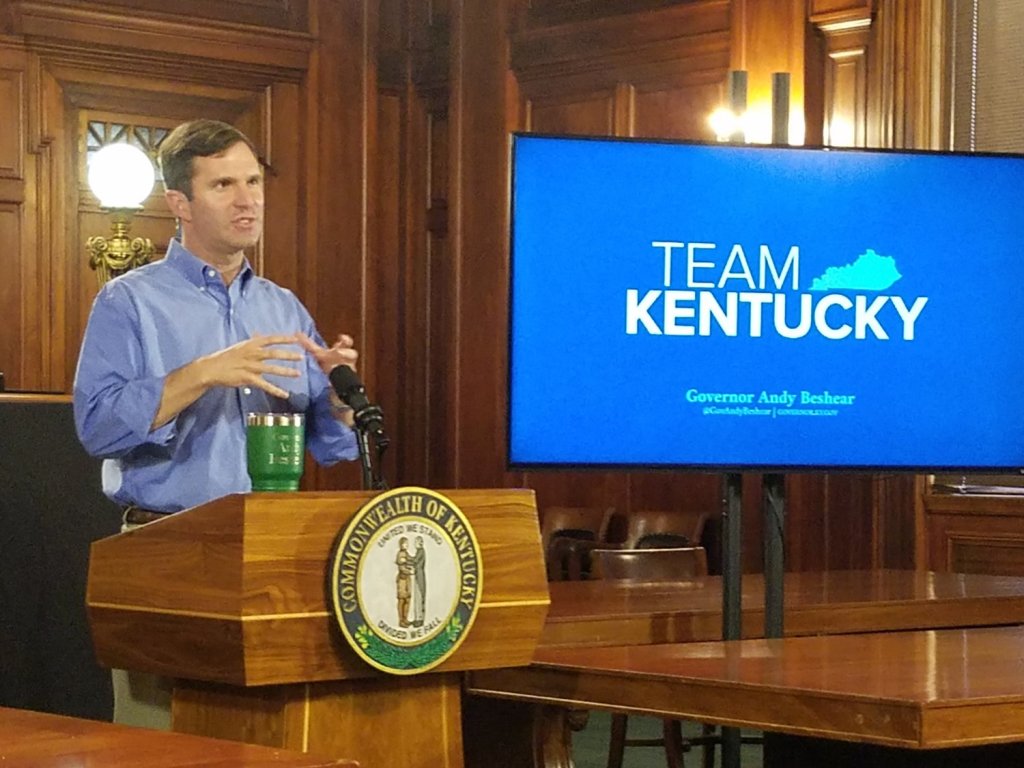 A sharp drop in the number of new cases of the coronavirus, as well as deaths, was reported by Gov. Andy Beshear during a Monday press briefing. He also pledged to improve healthcare coverage for African-Americans in Kentucky.

He said there were 70 new cases reported Sunday and another 120 on Monday, which brings Kentucky’s total to 11,476.  There was one death on Sunday, a 51-year-old woman from Daviess County, and one more death on Monday, a 66-year-old man from Hardin County.  Kentucky has had 472 COVID-related deaths since the start of the pandemic.

At Kentucky’s long-term care centers such as nursing homes, 69 more residents tested positive since Thursday, along with 34 staff members, and there were seven deaths.  Those centers have now seen 1,453 resident cases, 673 staff and there have been 292 deaths, all but three involving residents, representing around 62 percent of the state’s total of those who have lost their lives to COVID-19.

Beshear said 16.4 percent of the deaths have been African-Americans, who only make up 8.4 percent of Kentucky’s population, which he says points out the inequities in the state’s healthcare system, and is something he pledges to address.

“My commitment today is that we are going to make an effort to cover 100 percent of our black and African-American communities,” he said. “We’re going to be putting dollars behind it, we’re going to have a multi-faceted campaign to do it.  It’s time, especially during COVID-19, when we see what happens when you don’t have coverage, we’re going to make sure that everybody does.”

The governor also reported that Kentucky State Police and the Kentucky National Guard are no longer patrolling the streets of Louisville during protests over the death of Breonna Taylor, an African-American EMT who was shot to death by police who were executing a no-knock search warrant at her home in March. Her boyfriend fired shots when he thought someone was trying to break into the residence, wounding one of the officers, so police returned fire.  The 26-year-old was shot eight times by narcotics detectives who knocked down her front door.  No drugs were found in the home.

“The KSP deployment ended Saturday and the Guard had only been on standby for a number of days,” Beshear said.  “While those units are no longer stationed in Louisville, the calls for justice obviously continue, and we need to listen.”

The Kentucky State Police investigation continues into the death of a man in west Louisville after shots were fired at police and Kentucky National Guardsmen shortly after midnight on June 1. The officers and two Guardsmen returned fire.

David McAtee, the owner of Yaya’s BBQ Shack restaurant, was dead at the scene, where police and the Guard were trying to break up a gathering that was in violation of the 9 p.m. to 6:30 a.m. curfew that has been imposed by Louisville Mayor Greg Fischer.

Beshear said Secretary of the Cabinet J. Michael Brown will give an update of the investigation during Tuesday’s press briefing.