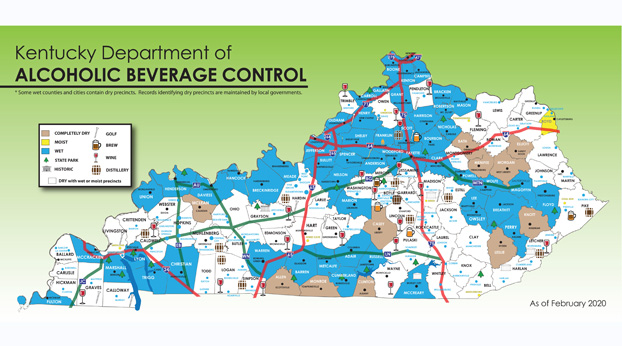 Is Middlesboro ready to be wet?

The city of Middlesboro could become wet when voters go to the polls on June 23.

The issue of businesses in the city being able to sell alcohol in package form will be posed in a question on the primary election ballot, according to Bell County Clerk Debbie Gambrel. She said there are 7,962 registered voters in the city, and the question they will see on the ballot will read, “Are you in favor of the sale of alcoholic beverages in Middlesboro, Bell County, Kentucky?” Voters will simply select yes or no.

The issue is on the ballot following the passage of an ordinance by the Middlesboro City Council on May 19, 2020.

If the vote to make the city “moist” in September 2015 is any indication, the race could be a close one. That election ended in a count of 1,298 voters in favor of the moist status, and 1,179 voters against it, with moist winning by 119 votes.

A city being moist means restaurants in that city can serve alcoholic beverages with a license. Judy Grandy, a member of the Middlesboro City Council who also serves as the city’s Alcoholic Beverage Control administrator, said there are currently five licenses in the city for such sales. Grandy explained that a restaurant with a license must generate at least 70% of its revenue from the sale of food, and as much as 30% can be generated from the sale of alcoholic drinks under the moist status.

The restaurants with licenses to sell alcoholic drinks pay taxes on those sales pursuant to Kentucky Revised Statute (KRS) 243.075. That tax money, by law, goes directly to the city of Middlesboro’s police department, according to Grandy. She said the money can be used several ways by the department.

“It can go toward anything. There is a formula for how it breaks down.You can use 100% of alcohol tax revenue for anything that regulates alcohol. If they wanted to do an education program in the schools, or the program they put on to educate young drivers about the importance of not drinking and driving, those things can be funded 100% by that money. The rest of the time, it is delegated into a percentage of what is spent on regulating alcohol; DUIs, breathalyzers, it can be used for partial salaries, partial vehicles, anything in that department that is broken down on the regulatory.”

Middlesboro City Clerk Sandy Wilson said the city collected $29,809.17 in taxes as a result of the moist status in Fiscal Year 2017-2018, which ran from July 1, 2017 through June 30, 2018. According to Grandy, if voters decide the city should be wet, that could mean much more money for the police department. She said she would estimate the tax revenue to be 4 to 5 times as much as is currently generated, meaning potentially $120,000 to $150,000 per fiscal year for use by local police.

If the city is voted “wet” later this month, Grandy said that would mean there would be the possibility of package sales of alcoholic beverages in the city. She said the number of licenses that would be granted would be based on the city’s population, and she understood that number to be three licenses with the city’s current population, which is estimated at 9,084, according to the United States Census Bureau’s July 2019 report.

Grandy added that additional stores in the city, such as grocery stores, could apply for a beer and wine license if they chose, and there would be no limit to the number of those licenses that could be granted. She stressed that even with the wet status, the city’s ordinance would not permit the opening of actual bars, and any establishment selling drinks would still be required to have a portion of its business come from food sales.

Middlesboro Police Chief Tom Busic said his department has already benefited greatly from the tax money generated by the city having its moist status. Busic said he has been chief since March of last year, but has served on the force as an officer for more than 20 years. In that time, he said the department never had tasers, but thanks to tax money from alcoholic drink sales in local restaurants, his department has been able to add tasers. He said the cost was around $60,000, and that has been set up in installments over a 5-year period.

Busic also said the police department has added three new vehicles. He said tax money from alcoholic drink sales helped pay for a portion of the city’s responsibility for grants for those vehicles.

Busic said he has not seen a noticeable increase in crime or other issues in the community following the moist status, and he said he would not expect a great deal of an increase if the city is voted wet. He added that from what he has heard about some of the businesses who will apply for a license if the vote passes, they are responsible business owners who would take their role of selling alcohol seriously.

One local group in support of the city becoming wet is known as “A Progressive Middlesboro Association.” The group has a Facebook page which was formed Feb. 24, 2020, and has encouraged viewers to vote in favor of the city becoming wet. Travis Moody is chairman/president of the group, and he said he sees many potential positives if the city is voted wet.

“If you look at the surrounding areas (Pineville, Tazewell, Lee County) they all offer alcohol. Which means, people in our community are leaving home and going to those areas to purchase their alcoholic beverages. In turn, that benefits those areas. We are tired of our money leaving our community. We want to keep it here. How will alcoholic beverage sales benefit Middlesboro? There will be an enormous economic impact. Jobs will be created. More tourist traffic generated. Tax revenue. We are losing out on tourism dollars from people who come into town expecting the ability to purchase alcoholic beverages, only to be told that we don’t sell that here,” Moody said. “Many people don’t realize where that tax revenue goes, it is given to the police department to help with alcohol resistance education programs, and needed equipment to help fight alcohol abuse. This allows some funds that were earmarked by the city to go to those programs, freed up to go to other areas in city government.”

Some local churches were contacted and given the opportunity to provide statements on the issue, but none had replied as of press time.

Grandy said if voters determine that the city will become wet, qualifying businesses interested in obtaining a license would be able to apply only following the official certification of the election. At that time, she said it could take up to 30 days past that point before anyone would be approved for a license.

For more information about voting in the upcoming election, contact the Bell County Clerk’s Office at 606-337-6143.

McConnell sees more to accomplish if elected to another term

Mitch McConnell has represented Kentucky in the United States Senate since 1984, the longest-serving senator from Kentucky in history. However,... read more