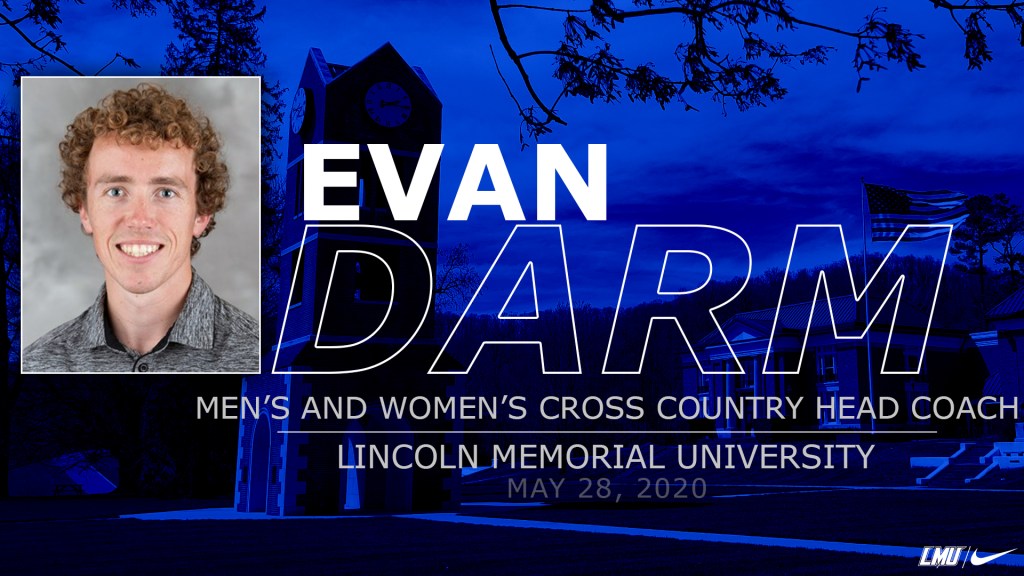 Darm Comes to Harrogate from Division I Campbell University

Lincoln Memorial University Director of Track and Field and Cross Country Rochelle Black has announced the hiring of Evan Darm as head men’s and women’s cross country coach.
Darm arrives in Harrogate after spending the past season as an assistant cross country and track and field coach at Campbell University.

“I’m excited to have Evan on board,” Black said. “With the success he’s had at his previous schools, I’m looking forward to the energy and work ethic he’ll be bringing to LMU. He was able to speak to a few current members of the team and grabbed their attention almost immediately. I have no doubt he’ll do an excellent job developing our student-athletes.”

During his year as an assistant coach, Darm assisted with the 2019 men’s Big South Cross Country Championship team and coached two All-Americans. He was responsible for recruitment, practice plans, and team gear, while also creating individualized training plans for athletes.

Prior to Campbell, Darm was the assistant cross country and track and field coach at Adrian College (Mich.). While there, he coached the 2018 Freshman of the Year to the first NCAA regional appearance by a freshman in school history. He was responsible for recruitment, visits, and individualized training. He also created the strength and conditioning program for all distance runners.

Darm also served as a graduate assistant and volunteer assistant at Campbell from 2015-18. During his time in Buies Creek, he helped create training plans for athletes, assisted the coaching staff with recruiting, meet planning, and travel, and assisted with the execution of workouts. He also helped the Camels to two Big South championships in 2016 and 2017.

Darm graduated from Campbell University with a Bachelor of Science in exercise science in 2015 and his Master of Education in 2017. He currently resides in Harrogate.