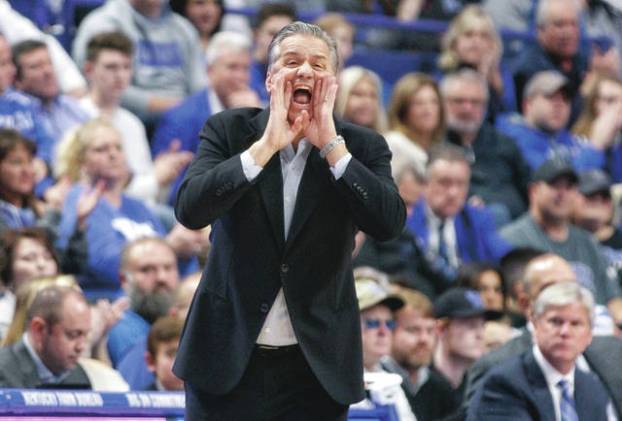 John Calipari will have to wait two more years to see the Queen.

The Kentucky coach was disappointed after a three-game series against Michigan was postponed Wednesday. The Wildcats were scheduled to take on the Wolverines in the Basketball Hall of Fame London Showcase in December but the series was put on hiatus because of the ongoing COVID-19 pandemic.

“I’m disappointed that we aren’t able to go to London this season – I was really looking forward to meeting the Queen,” Calipari said. “But, I’m glad we were all able to come together, figure this out and preserve this series for the future.”

The three-game series between the two teams will begin on Dec. 4, 2021 when Kentucky travels to Ann Arbor to play at the Crisler Center. The series then moves to London and the O2 Arena on Dec. 4, 2022 and will conclude on Dec. 2 , 2023, at Rupp Arena.

Calipari said canceling the scheduled opener was “a tough decision for the Hall of Fame because we all want to play this game in London, but I support the group’s decision in putting everyone’s health concerns first and pushing a temporary pause on this.”

John L. Doleva, president and CEO of the Basketball Hall of Fame, said the organization placed a priority on safety when making a final determination on the contest.

“As we navigate these unprecedented times, the Basketball Hall of Fame has remained vigilant in placing health and safety above all else,” he said. ““Unfortunately, the unknown combination of health, safety, international travel regulations and the economic viability for all parties involved has required us to postpone this highly anticipated event at The O2. We look forward to hosting a fantastic event in 2022.”

While the series is on hold, Calipari was glad the two schools reached a future agreement.

“The good news is we’re still able to play three great games with Michigan and we will still follow through on the original plan of going to London … and hosting the Wolverines and (coach) Juwan Howard, one of the bright young coaches in the game, at our place,” he said.

Howard agreed with the decision.

“We know precautions and new guidelines are being created and used every day due to the coronavirus,” Howard said. “The Hall of Fame took the time to review what is happening around the world and explore all options — all the safe options for the teams and most importantly the fans. The best thing is this tremendous event isn’t canceled, it’s just delayed.”

Kentucky curently has eight dates in place for eight opponents next season. UK opens the season on Nov. 19 against Kansas in the Champions Classic at the United Center in Chicago. Detroit Mercy (Nov. 13), Hartford (Nov. 17), Georgia State (Nov. 20), Richmond (Nov. 23), Georgia Tech (Nov. 27) Clevland State (Nov. 30) and UCLA (Dec. 19) are the games already on the current schedule. Kentucky also will play Louisville and an announced opponent in the SEC/Big 12 Challenge.

“Our staff is working hard to fill out the rest of our non-nconference schedule and I know our fans will be excited about what we put into place,” Calipari said.