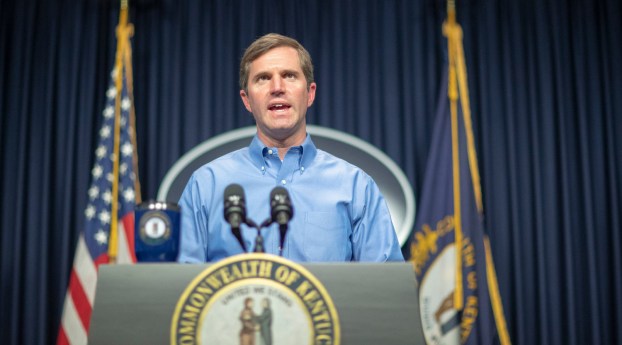 Kentucky has now topped 9,000 cases of the coronavirus and reached the 400 mark in deaths, Gov. Andy Beshear announced on Wednesday.

During his daily press briefing at the Supreme Court chamber in the Capitol, the governor said there were 127 new cases, making it at least 9,077 since the first case was reported on March 6 in Kentucky.

There were also six deaths reported to state public health officials on Wednesday, bringing that total to an even 400. Two occurred in Boone and Jefferson counties, with one each in Hopkins and Oldham counties.

“Without all of our heroic actions, the numbers would have been a heck of a lot worse,” Beshear said. “Let’s all acknowledge that losing 400 people to anything at anytime for any reason isn’t okay. It’s just not. Those are 400 families that are in pain. I never thought as governor I’d stand up and talk about losing 400 people to something that I and we are battling.”

Long-term care facilities such as nursing home are still seeing an increase in cases, but Wednesday’s total was less than in many recent days. Such facilities reported 15 new cases among residents and 16 involving staff members. That brings the pandemic total to 1,185 residents and 563 staff, with 224 deaths, all but two involving residents. Cases of COVID-19 have now been reported at 120.

Lt. Gov. Jacqueline Coleman gave an update on the Team Kentucky Fund. “We have been up and running for a week and a half with applications, and as of this day we have about 1,900 applications that have been received and are being processed.”

The applications are being taken through local Community Action agencies to distribute money to people statewide who have suffered job loss or major reduction in hours.

“Because of the generosity of Team Kentuckians from across the state,” she said, “we now have about $3.1 million in the fund.”

People can contribute to the fund at donate.ky.gov. Donations are tax-deductible and 100 percent of the money will go to those in need, Coleman said.

Cumberland, KY – On May 22, Southeast Kentucky Community and Technical College launched a virtual celebration for its fall 2019... read more