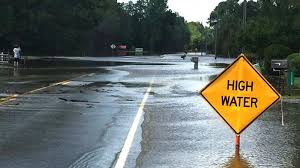 Two women were rescued from high water in Bell County

Two women were rescued from high water in Bell County Monday after heavy rain moved through that brought flooding to parts of the community.

Troopers from Post 10 Harlan and local first responders worked together to save an elderly and young female that were trapped in high water on Jim Mcgaffee Road. Once on scene, Tpr. Joey Brigmon requested for Bell County Rescue Squad to respond for assistance.

Before any first responders were able to arrive on the scene, Tpr. Brigmon entered into the water and was able to make it to the Toyota Van before it turned over. Tpr. Chad Gregory responded from Knox County and an Officer with Fish and Wildlife was able to assist with the rescue.

Trooper Gregory also entered the water and delivered a rope to Trooper Brigmon. First responders were able to hold onto the rope while Trooper Brigmon tied it around himself before packing both individual’s from the flooded vehicle.

Once both individuals were rescued from the flooded water, they were medically checked out by Bell County EMS and released.