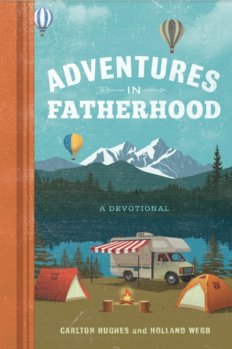 Cover photo for Adventures in Fatherhood, by Professor Carlton Hughes. 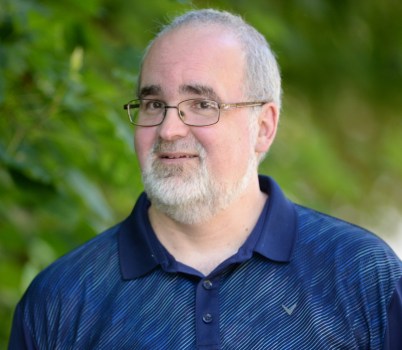 Cumberland, KY – Professor Carlton Hughes has spent 30 years in the classroom offering encouragement to students at Southeast Kentucky Community and Technical College. Now he has focused his attention on another demographic: fathers.

His latest book, Adventures in Fatherhood, is a 60-day devotional co-authored with Holland Webb. Said Hughes, “He and I are both on the ‘back end’ of raising kids, as our children are beginning to forge out on their own. We felt like we could share stories from the ‘front lines’ of fatherhood, telling stories of raising our kids and what God taught us in the process, to inspire fathers on the journey.”

Hughes says that while he and Webb have different perspectives—“Holland was a single dad, while my experience was more of a traditional family setting”—their diverse experiences add dimension to the work.

According to Hughes, getting their book from proposal to contract to printed form was a long process. The idea was “hatched” at the 2017 Blue Ridge Mountains Christian Writers Conference where he and Webb first met. They wrote a proposal and submitted it to Cyle Young of Hartline Literary, their shared agent. The following year, they shopped the proposal to various editors and publishers, but it wasn’t until the 2019 conference that they received news of a contract. On April 7 2020, the book was released by the Elle Claire imprint of Worthy/Hachette Publishing.

Hughes says that “waiting for a publisher to ‘bite’ was agonizing at times, but I kept clinging to God’s promises. As for the writing process, once we got the contract, we had a VERY tight deadline—less than two months. That looming deadline kept me focused! I work better with a deadline.”

At Southeast, Hughes serves both the Cumberland and Whitesburg campuses as a professor of communication teaching Public Speaking, Interpersonal Communication, and Journalism. He has taught dual credit courses at Harlan County High School since the doors opened 12 years ago. He is the faculty adviser to The Southeasterner student newspaper and has been active with the Southeast Christian Fellowship, Higher Ground, and other student groups.

On Wednesday evenings and Sunday mornings, he serves as a children’s pastor at Lynch Church of God. In his “spare time,” he is a freelance writer. His work has been featured in Chicken Soup for the Soul: The Dating Game, The Wonders of Nature, Let the Earth Rejoice, Just Breathe, So God Made a Dog, and Everyday Grace for Men. As for his future projects, he has several proposals for additional devotionals that his agent is pitching, and currently he is at work on another proposal.

Adventures in Fatherhood is available on various online outlets and will appear in stores once the pandemic crisis has abated. Those interested in purchasing may click this link for more information:

A Jenkins native, Carlton lives in Cumberland with his wife Kathy where he is an empty-nesting dad to sons Noah and Ethan and daughter-in-law Kersyn.

When asked to share some final words of wisdom, he says, “Hang in there and enjoy the small moments. The old adage “the days are long but the years are short” is so true. Also, remember the only perfect Father is God. You don’t have to be a perfect dad—just a present, involved dad. You will make mistakes, and that’s okay.”