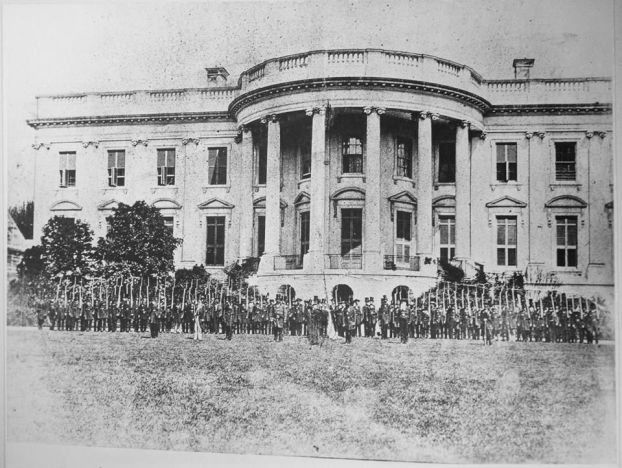 Lincoln Letters for Kids: The White House during the Civil War

Have you ever visited the White House? It is a special house in Washington, D.C. where the President of the United States both lives and works. Sometimes, it is called the “Executive Mansion,” or “The People’s House.”

That last name is very important. Americans have long believed that although the president lives in the White House, the house truly belongs to them. Abraham Lincoln found that out when he lived there from 1861-1865.

If you visit the White House today, there are many steps you have to take in order to visit. You might be invited by the president, and that is the fastest way to gain entrance.

When you arrive at the White House, many guards check to make certain that you are who you say you are. In fact, you may go through as many as four checkpoints!  In Abraham Lincoln’s lifetime, though, all a person had to do was to walk up to the front door and be admitted by the doorkeeper.

Today, you likely will not see the president if you visit the White House. All you had to do in 1865 was be willing to wait outside of his door and you could gain at least a five-minute interview with Abraham Lincoln!

Many people visited Abraham Lincoln during the Civil War. Some visited him to ask for favors, like jobs or promotions. Others asked for pardons for their loved ones.

In one of the Abraham Lincoln Library and Museum’s dioramas, or 3-D scenes, you can see a lady begging President Lincoln for her son’s life. He had fallen asleep at guard duty because he was so tired, and that was punishable by death! Mr. Lincoln pardoned her son, saying that he believed the young man would do his duty a good deal better above ground than below it. It was one of his last acts as President of the United States.

Seeing all of the people could be very stressful on President Lincoln. He slept very little, though, so that he could spend as much time talking to the people, his generals and politicians as possible.

To help keep the house portion of the White House separate from the working portion a special partition, or wall, was erected between his office and living area. Still, many times each day, his sons, Willie and Tad, visited Mr. Lincoln while he worked.

Some people did not like that the boys spent so much time in his official office, but Lincoln welcomed them. He did have to stop his youngest son, Tad, from selling tickets to see him. Though Tad wanted to sell tickets to raise money to help soldiers, access to the president was meant to be free!

And speaking of soldiers, they were all over the White House! In fact, some camped out inside and on the grounds during the war. Abraham Lincoln often visited with them, and learned about their experiences.

As leader, he wanted to learn all that he could about how to help the people he served as president, and he especially wanted to learn how to best help the soldiers who risked their lives for their country.

Sometimes, too, he and Mrs. Lincoln brought the soldiers gifts to make their time on the grounds happier. Tad became such a common sight among the soldiers that he was gifted his own soldier’s outfit!

Tad always looked for ways to help the soldiers because he admired them.

Today, you can help soldiers, too. This week, we celebrate Memorial Day as a nation. It is a day when we remember soldiers who gave their lives for the country. In fact, it was born out of the Civil War.

It is also a good idea to thank the living for their service. There are many ways that we can say “thank you” for the brave work that soldiers do!