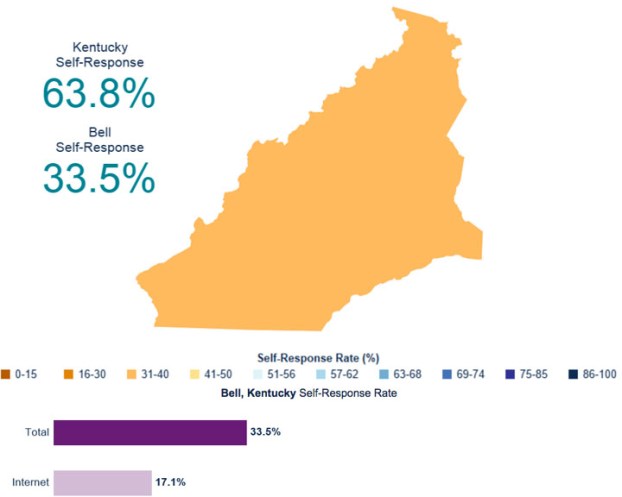 Bell County behind in 2020 Census response

The original deadline to complete the 2020 U.S. Census has come and gone, but it’s still not too late to stand up and be counted.

Bell County is struggling in the count, and well behind many counties, as well as the state response rate.

As of Friday, only 33.5% of Bell County residents had completed the 2020 U.S. Census questionnaire. Of those, just 17.1% did so using the internet, with the rest being completed via mail.This year’s census numbers are far behind the final tally from the 2010 census, when 43.9% of Bell Countians responded. For 2010, Bell County’s total population was listed at 28,709 people. Kentucky’s population for 2010 was listed at 4,348,181 according to the U.S. Census Bureau.

The county is performing well below the state as a whole, with 63.8% of Kentuckians responding to the census. The internet was used more heavily statewide, with 47.4% of Kentucky residents completing the questionnaire online, according to data from the Census Bureau. Nationally, 60.1% of Americans have completed the census.

The census, which is required by law, is taken every 10 years and will count the population of the U.S. and five U.S. territories, which are Puerto Rico, Guam, American Samoa, the Commonwealth of the Northern Mariana Islands, and the U.S. Virgin Islands.

Legally, failing to answer all or part of the census can carry a $100 fine, according to the American Bar Association. The penalty goes up to $500 for giving false answers. In 1976, Congress eliminated both the possibility of a 60-day prison sentence for noncompliance and a one-year prison term for false answers. The Sentencing Reform Act of 1984 effectively raised the penalty to as much as $5,000 for refusing to answer a census question, but a census spokeswoman said that is viewed as a last resort.

The Bar Association reports that there have only been a handful of prosecutions for noncompliance, and none since 1970.

The ongoing COVID-19 pandemic affected the census, with area census offices being closed for some time. Many have now begun to do business again, and Kentucky’s two regional offices, located in Lexington and Louisville, resumed business May 11, according to the U.S. Census Bureau’s website. The offices will also complete the hiring process for nonresponse follow-up field staff, and as soon as it is safe to do so, more area census offices will resume activities, according to the website.

The bureau indicated that it will adjust census taker operations during the pandemic as necessary to follow local, state and federal health guidelines. In some areas, census takers have resumed their work updating address lists and leaving paper questionnaires at homes that have not yet received them, the website said.

The U.S. Census Bureau says if someone visits your home to collect information for the 2020 Census, you should be sure they have a valid ID badge with their photo, a U.S. Department of Commerce watermark, and an expiration date. Census workers may also carry bags and other equipment featuring the Census Bureau logo. If you still have questions, you should call the regional office, which for Kentucky is based in Philadelphia, at 267-780-2600.

If you have not completed the 2020 U.S. Census, you can do so by visiting my2020census.gov online.

The Cumberland Gap High School graduating class of 2020 was celebrated with a parade Friday evening. The parade kicked off... read more