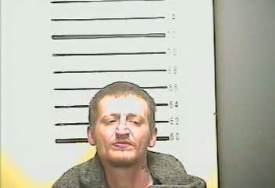 A Middlesboro man remains in jail and received several more charges after an alleged bike theft over the weekend.

According to the citation, Middlesboro Police Officer Ryan Collins was dispatched to Cracker Barrel on the possible bike theft. Once on scene, Collins made contact with 32 year old Thomas Dillman. A warrant check was conducted leading to the discovery of both felony and misdemeanor warrants.

Dillman fled the scene on foot while reaching into his front pocket and screaming, causing a disturbance in the parking lot. Collins stated that after a short foot pursuit, Dillman was apprehended but continued to resist. Collins performed a search and found a small baggie that contained a crystal like substance that is believed to be methamphetamine.

After processing, Dillman was taken to Middlesboro ARH where he kicked nurses and spit on Collins.

WRIL contributed to this story.