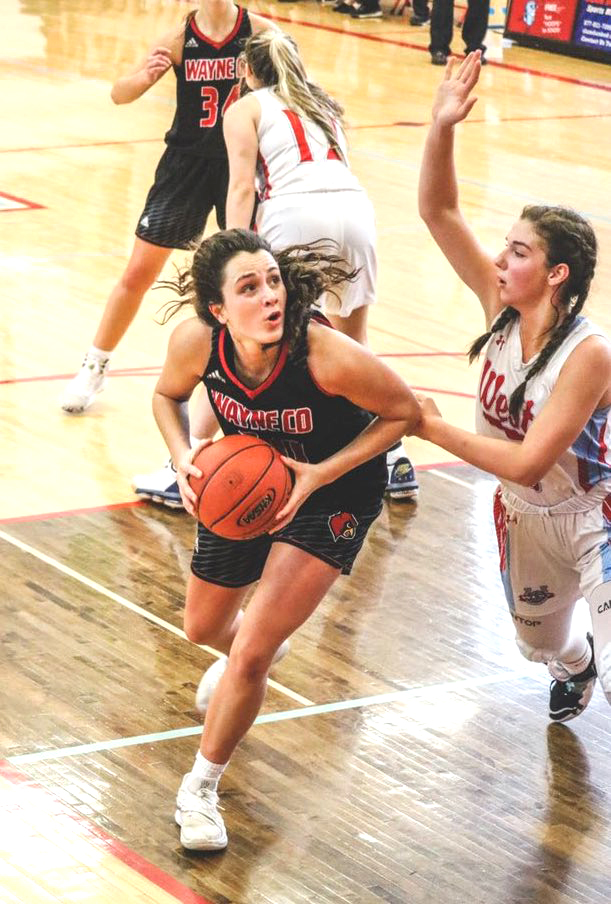 It’s not like Macey Blevins had to love basketball but it certainly was easy for her to do so.

“I wouldn’t say there was no choice. When I was young I was not into sports but I always watched my brother and my dad always coached, so I was always around basketball. Then about second grade I just fell in love with it and have been playing ever since,” said Blevins, a junior at Wayne County High School.

Her father, Shane, scored 2,120 points at Monticello and was on the 12th Region championship team in 1987. Her brother, Trey, was the starting point guard on Wayne County teams that won the 12th Region in 2013 and 2014. He finished his career with 2,727 points and 760 assists. Her mother, Angie Cox Blevins, was a two-time All-American at Eastern Kentucky University after her all-state career at Pulaski County. She had 170 career 3-pointers and 488 assists, both school records at the time, along with 1,425 points. She led the Ohio Valley Conference in steals both her junior and senior seasons and later played professionally in Germany.

“Basketball was always the talk of the house,” Macey Blevins said. “Basketball runs through my entire family. My uncle, aunt, everybody … I always knew it ran in my blood but I never picked it up until second grade.”

She was a quick learner and has 2,215 points, 807 rebounds, 436 assists and 202 steals in 150 career games and has led her team in scoring, rebounding, steals and assists the last three years. She figures to be one of the leading candidates for Miss Basketball next season.

The 5-10 point guard had scholarship offers from Arizona State, Northern Kentucky, Western Kentucky, Marshall, Eastern Kentucky, Austin Peay and Chattanooga before the COVID-19 crisis hit. She’s also been in contact with both Kentucky and Louisville and most recently Dayton. She did take an unofficial visit to UK last season when Kentucky hosted South Carolina.

It’s no surprise the Wayne junior has grown up a Kentucky fan.

She has followed the careers on in-state players Maci Morris, Blair Green and Emma King on their way to Kentucky and would love to follow the same path.

“That has always been a dream of mine. I have kind of held it in the back of my head. But hopefully this summer it will become a reality but one of my biggest dreams has always been to play at Kentucky,” she said.

She had hoped summer play with Kentucky Premier in the EYBL would give UK, Louisville and other coaches a chance to evaluate her more. She’s still hoping EYBL play might start in July.

“I haven’t talked to Kentucky or Louisville recently but I knew what I did this summer would be very important for them to see because when you do well in the summer you get more offers,” Blevins said. “I have been doing some virtual visits with some schools but right now I just plan to see what happens this summer and then make my (college) decision.”

Like most players, she has no gym to work out in now. Instead, she’s shooting on the goal in her driveway and doing what weight training and running she can as well.

“I am ready for this to be over. I have never been out of a gym this long since I was a baby. I’ve always been in a gym,” she said.

Blevins believes versatility is her strength. She plays point guard on her high school but for Kentucky Premier has played on the wing or even in the post when another player got hurt.

“I can guard the post and play offense in the post,” she said. “I know how to rebound and know that’s a big part of the game. Shooting was actually the first part of my game that kind of stuck out. I used to be just a 3-point shooter, especially my seventh and eighth grade years when I played high school. They just put me in to kick out for a 3. After I started working with Jared Parmley of Kentucky Premier I got to be more of a driver but my shooting has kind of always been there.”

One former Wayne County player, Jessica Hardin, has played at Kentucky. Hardin’s father is now Blevins’ dentist and their families know each other.

“I am pretty sure all of Wayne County would be behind me if I got the opportunity and made the decision to play at Kentucky. I think that would be really cool to play there but I also have a lot of other great opportunities,” Blevins said

“I don’t think it is pressure deciding on a college because at the end of the day I will decide where I feel the most comfortable. I am just keeping all my options open. I want to go where I know I am loved there and feels like home. I am trying to not really think a lot about it and just let whatever happens happen. I just think everything happens for a reason.”

Blevins gets asked a lot about her future because she says sports are a big deal in Wayne County.

“Football, basketball, pretty much anything. It is kind of cool after when everybody that sees me out in the community always asks, ‘How are you doing? How is basketball going?’ This year we really had some good crowds,” Blevins said. “That just helps motivate you to work harder to do even more.”