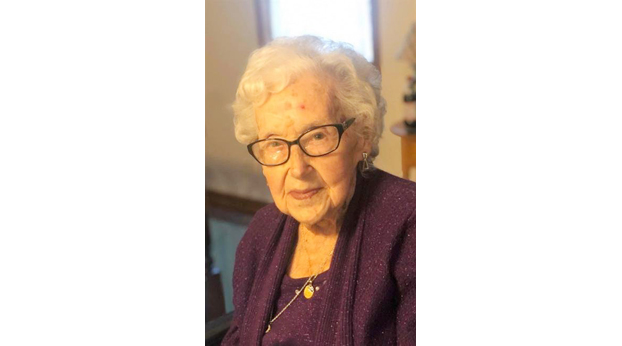 Virginia Harris, 103, was declared recovered from COVID-19 earlier this week.

MADISONVILLE, Ky. (KT) – A Madisonville nursing home confirmed Tuesday it’s dealing with the coronavirus. And for the first time, a Hopkins County patient was identified — possibly the oldest one of all.

“It was scary,” Adam Harris said of what his grandmother endured. Virginia Harris, 103, was declared recovered from COVID-19 earlier this week.

Adam Harris, the principal of Madisonville North Hopkins High School, said his “mamaw” was tested at Ridgewood Terrace Health and Rehabilitation Thursday, April 2, because she had a fever. The confirmation of coronavirus came last Wednesday.

“By the time the positive test return came, she almost had it licked,” he said. But in between, Virginia became sick and had difficulty understanding what anyone said.

Hopkins County Judge-Executive Jack Whitfield Jr. noted Wednesday that Virginia Harris was born before the 1918 “Spanish flu” pandemic. Now she’s survived two of them. Whitfield called her “feisty.” Her grandson isn’t sure that’s quite the word.

“She’s a tough old bird,” Adam said — so tough that she moved out of her lifetime home near Dalton only four years ago. But he added she’s “strong in faith, always polite to everybody and very positive.”

Harris shared his grandmother’s story as her nursing home on Cornwall Drive reported “several positive cases among the patients and the staff.”

Mandy Matheny, Ridgewood Terrace marketing director, had no precise numbers. But Hopkins County Health Director Denise Beach said Monday that one long-term care facility, which she did not name, had an “outbreak” among 13 patients and five staff members.

Exactly how the virus entered Ridgewood Terrace is unclear.

“We’ve had no visitors in the building,” Matheny said. She speculated COVID-19 could have arrived through “residents who go to the hospital” or staff members.

“We’re in a community where it’s widespread,” Matheny said.

The confirmed number of coronavirus patients across Hopkins County increased by five Tuesday to 99. Whitfield said 49 of them have recovered. The local death count remained at eight.

Whitfield and Madisonville Mayor Kevin Cotton spent much of their Tuesday Facebook briefing rejecting social media calls to completely “lock down” the county for two weeks. They said that would not eliminate the virus.

“To completely institute martial law is past the line of what we can do,” Whitfield said.

Besides, he said, people can have coronavirus for two weeks before showing any symptoms. Then comes a potential two weeks of dealing with the impact, followed by a three-day waiting period before being considered recovered.

“Locking everything down is just not practical,” Whitfield concluded.

Whitfield added that the coronavirus death rate among patients at long-term care facilities is 60%. Gov. Andy Beshear put the death total in those facilities statewide Tuesday at 33 patients, plus the first death involving a health care worker in Adair County.

That’s why Ridgewood Terrace is working with local and state health departments to bring things under control quickly.

Matheny hopes the number of cases at the center will peak in the next two weeks, then start to decline. But she notes Ridgewood Terrace cares for people considered to be at the highest risk of dying from COVID-19.

“We need this to end,” Matheny said.

Except for Harris, the names of the Hopkins County patients remain a mystery unless they or their families choose to reveal themselves. The county coroner says that’s the way it should be.

KDA: Income guidelines relaxed from 130 to 185 percent to qualify