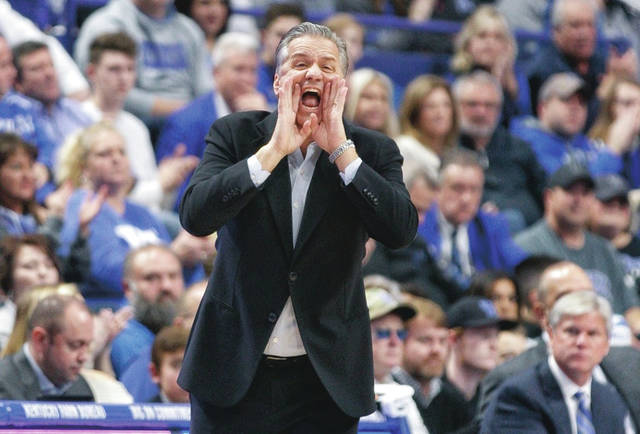 Calipari expects at last five players to declare for the NBA Draft, including Southeastern Conference Player of the Year Immanuel Quickley, along with Nick Richards, Ashton Hagans, EJ Montgomery and Tyrese Maxey.

“My guess is four to five guys would probably test the waters,” the Kentucky coach said. “They changed a rule that I wasn’t on top of that you can now declare for the draft every year you’re in college and if you choose to go back it doesn’t hurt your eligibility.

“It used to be after the second time you had to stay in the draft. Now you can do it every time. So, I don’t know how many will test the waters. We haven’t gotten to that point to talk to them. My guess is four to five of them will.”

In at a wait-and-see mode because of the ongoing COVID-19 pandemic, Calipari said the process is by the hour, day by day and is giving his players information from the NBA to “find out where hey fall at this point in time.”

“Guys that have a decision to make, whether they want to stay in the draft or not, the NBA is saying, ‘We’re keeping our date the same,’” Calipari said. “OK, well what about the combine? That is going to move, we believe. Well, what about the draft date? That will move. OK. What about bringing them to your facilities? We don’t know when that will happen or if it’ll happen.”

The uncertainly surrounding the NBA Draft and NBA Combine concerns the normal date for both events, with the draft tentatively scheduled for June 25 in Brooklyn, New York.

“I think these kids should have more time making that decision,” he said. “My worry is for guys … let’s just talk they’re working out right now. If they spend two months and don’t do anything and they try to go work out for an NBA team, it ain’t going to work for them.

“Fate, it wasn’t designed obviously, but we’re in pretty good shape and anything we add becomes, ‘All right, we have a chance with this or that,’” Calipari said. “I think what may come out of this, reading tea leaves, which I’ve said since my UMass days, why are we recruiting in the summer? Why are we doing this? Let’s recruit April, May. Let’s recruit some in September and then let’s do it during the school year. We get a chance to be with our own team. We get a chance to lead normal lives, like we are leading now.”

Calipari hopes the current absence of recruiting lead to a permanent result in the future.

“Let’s just do stuff during the school year,” he said. “Let’s do it in May. Let’s do it in September and then let’s get down to a more normal life for all coaches. That may come out of this when college presidents say, ‘Tell me why we need this summer now? Because we just went without it and everything’s OK.’ So, that may happen.”