<p>Photo courtesy of the Appalachian Wildlife Foundation</p> <p>Boone’s Ridge, previously known as the Appalachian Wildlife Center, was the center of conversation during the Harlan County Chamber of Commerce meeting on Wednesday. David Ledford, president and CEO of the park, presented this image during the meeting to give those in attendance an idea of how the main building will look once completed.</p> 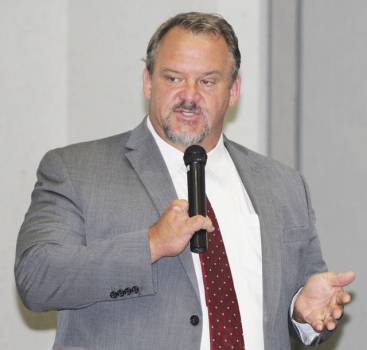 David Ledford, president and CEO of Boone’s Ridge, gave an update on the progress being made on the site during a Harlan County Chamber of Commerce meeting recently. Ledford said the site is on track to open in May 2022 with potential employment beginning in late summer of 2021.

Before going down a list of key points he wanted to mention, Ledford began with an almost five-minute long video to give viewers a chance to see what the future could hold for Boone’s Ridge and those who trek its paths.

The video used footage of the vast mountain range southeastern Kentuckians in Bell and Harlan counties call home, including video of elk herds that were released in the mountains across the “Bridge to Nowhere.”

Ledford said the 80,000 square foot building is estimated to create roughly 2,900 new jobs, bring in $174 million in regular spending and bring a need for new local businesses and places to stay.

The property will also include a variety of other things, such as picnic areas, a petting zoo, visitor center, museum, artisan hall for craftsman to display and sell their works, gift shops and restaurant. Ledford said discussion has also taken place to consider an RV park toward the front of the acreage, with additional educational program and seminars to take place inside the buildings gathering space.

“As of now, we’ve raised $45.4 million dollars for this project and construction will resume in May,” Ledford said. “We’re working to secure another $8 million and that will get us through our first two years of operation.”

Ledford said the group has needed to supply a number of “feasibility studies and independent assessments of our attendance projections done for a variety of different funding – private and federal.”

“The new information we got, the feasibility study came up with 900,090 thousand in the mature year, probably year four or year five.”

Ledford said most of the visitors will be coming from out of state, so the market he is trying to appeal to the most is the “drive tourism market,” similar to how the Ark Encounter operates in northern Kentucky. He added with the projected flux of people coming to the area, it is estimated to bring in $202 million in spending to the area in one year.

Ledford said for those wishing to know more about Boone’s Ridge, an updated website with new information is available at www.boonesridge.com.