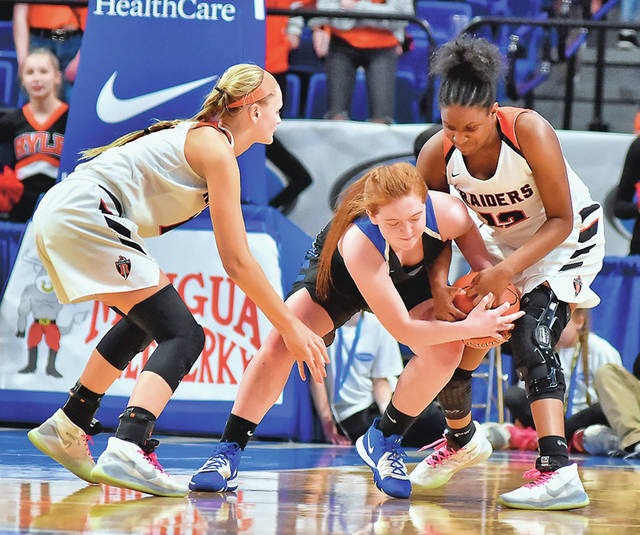 Players from Letcher Central and Ryle battled for a loose ball in first-round action from the state tournament on Wednesday. Letcher Central, the champions of the 14th Region, fell 59-36.

LEXINGTON — Even without the services of injured McDonald’s All-American and Oregon signee Maddie Scherr, defending state champion Ryle found a way to win.

The Lady Raiders were able to overcome a 14-9 first-quarter deficit during Wednesday’s opening round action of the 2020 Mingua Beef Jerky/KHSAA Girls’ Sweet 16 and defeat 14th Region champion Letcher Central, 59-36.

Brie Crittendon, Abby Holtman and Sarah Baker each led Ryle with 11 points apiece while Kaylee Banks turned out to be the Lady Cougars’ lone player to score in double figures. She finished with 21 points and 13 rebounds.

“With Maddie being out, we have to run some different things,” she said. “We have kids in different places, so it took them a minute to think of all of that.”

“We’ll see. It’s day by day,” Haitz said. “She’s doing great, and we’re doing everything she needs to do. For us, health comes first. In anything we do with any of our players, we want to make sure they’re safe and healthy before we put her back out on the floor.”

The Lady Raiders turned in a stellar defensive effort, limiting Letcher Central to an 11-of-45 shooting effort, including 3-of-18 from behind the arc. They also forced the Lady Cougars to turn the ball over 23 times. Ryle hit 22-of-59 shot attempts and 6-of-18 from 3-point range. They were outrebounded, 40-39.

A solid rebounding effort in the game’s first eight minutes allowed Letcher Central to build an early 14-9 lead. The Lady Cougars received a nine-point scoring effort from Banks while they outrebounded Ryle, 11-4.

The Lady Raiders opened the second quarter with six quick points by Crist, Eubank, and Douthit while taking a 15-14 lead during the process. Letcher Central answered with a 5-1 run, capped off by Bates’ layup with 2:27 remaining to take a 19-16 advantage.

Ryle finished strong, outscoring the Lady Raiders 9-1 during the remainder of the first half to take a 25-20 lead into the locker room. Eubank, Baker, and Douthit each scored baskets during the run while Holtman’s 3-pointer at the buzzer pusher her team’s lead to five points.

Both teams struggled shooting the ball from the floor in the first half with Letcher Central hitting on only 7-of-24 shot attempts while the Lady Raiders were 10-of-29. The Lady Cougars’ 22-15 rebounding edge kept them in the game along with Banks’ 13-point, 10-rebound effort.

Ryle began to pull away in the second half by opening the third quarter with a 13-2 run.

Crittendon’s 3-pointer gave Ryle a 38-22 edge with 3:06 remaining in the period. She scored five points during the run while Johnson added four points.

The Lady Cougars were able to get back into the game behind the play of Banks, who scored seven points during the period. Letcher Central went on an 8-2 run during the final two minutes to cut its deficit to 40-30 going into the fourth quarter.

The Lady Raiders put the finishing touches on their win by outscoring Letcher Central, 19-6, during the game’s final eight minutes.

Sixth Region champion Bullitt East might have started the game slowly, but the Lady Chargers finished strong by punching a ticket into quarterfinal action of the 2020 Mingua Beef Jerky/KHSAA Girls’ Sweet Sixteen with a 66-55 win over Elizabethtown.

The Lady Chargers (25-7) misfired on 10 of their first 11 shot attempts and dug themselves a 10-point hole before roaring back during the second and third quarters to secure the 11-point victory.

“Coming in, I thought one of the keys was rebounding the basketball,” Bullitt East coach Chris Stallings said. “We wanted to keep them off the glass. For the most part, rebounding was the key to us getting the lead…I’m proud of these kids and proud of this team.”

Lexi Taylor led the way for Bullitt East with 28 points and nine rebounds while Gracie Merkle finished with 10 points and three rebounds. The Lady Chargers shot 17-of-42 from the floor, and 23-of-28 from the free-throw line while outrebounding the Lady Panthers, 34-30.

Whitney Hay led Elizabethtown (27-6) in scoring with 16 points while Kayra Freeman finished with 14 points. The Lady Panthers shot 18-of-55 from the floor, including a 5-of-19 effort from 3-point range.

Elizabethtown took advantage of Bullitt East’s 1-of-10 shooting effort in the first quarter and built a 14-8 lead. The Lady Panthers hit 6-of-11 shot attempts while Freeman, Hay, and Franklin each scored four points apiece to help Elizabethtown to a six-point advantage.

The roles flipped in the second quarter with the Lady Chargers opening the period with an 18-0 run to take a 26-14 lead at the 2:34 mark.

Bullitt East’s Taylor and Gracie Bowman each had a 3-pointer apiece during the run while the Lady Chargers finished the half connecting on 6-of-18 shot attempts in the first half.

Elizabethtown’s shooting cooled down during the period, and the Lady Panthers were held scoreless until Freeman hit a 3-pointer and closed out the half with a layup to cut her team’s deficit to 26-19 at the half.

Elizabethtown connected on only 2-of-11 shot attempts during the period and 8-of-22 from the floor during the first half. They were outrebounded 17-7 and turned the ball over eight times.

Bullitt East extended its lead to 32-19 early in the fourth quarter after a layup by Griffin and four consecutive points buy Taylor capped off a 5-0 run.

The Lady Panthers’ Hay cut her team’s deficit to 37-27 after a 3-pointer at the 3:56 mark of the third quarter, but five consecutive points by Bullitt East’s Merkle pushed the Lady Chargers’ advantage to 48-33 entering the fourth quarter.

Elizabethtown was able to make one final push during the final eight minutes.

A 3-pointer by Freeman ignited a 12-2 run that saw the Lady Panthers pull to within five points (50-45) with 4:52 remaining. Bullitt East’s Taylor responded with her second 3-pointer that gave her team a 53-45 edge.

Freeman kept her team alive with another basket at the 2:59 mark to make the score, 53-49, but Merkle came up big on both ends of the court to help secure the in for the Lady Chargers. Her layup with less than two minutes remaining made the score, 57-49, while she also added a couple of blocks that kept the Lady Panthers from getting any closer.

A case of the nerves almost got the best of Casey County, but in the end, the Lady Rebels did just enough to pull out a slim 49-46 win over Pikeville during Wednesday’s first-round action.

Casey County overcame a 16-of-43 shooting effort as Jordyn Stephens and Lauren Lee combined to score 31 points to lead the Lady Rebels to the three-point win.

I think the court, it shellshocked us most of the game,” coach Tara Weddle said. “First time on the big stage in this environment, kind of shook us up for a bit.”

It was nip and tuck during first quarter action until Casey County managed to claim a 14-7 advantage after a layup with Haley Brock at the 1:25 mark.

Pikeville’s Emma Ratliff managed to hit a 3-pointer before the end of the period to cut her team’s deficit to 14-10.

The Lady Rebels were able to put some distance between themselves and Pikeville thanks to Gena Cravens knocking down two 3-pointers while Jordyn Stephens hit one.

Cravens’ 3-pointer combined with a free throw by Stephens allowed Casey County’s lead to grow to 29-19 at halftime.

Stephens scored nine points in the first half while Lauren Lee added seven points. The Lady Rebels hit 10-of-23 shot attempts while limiting the Lady Panthers to an 8-of-22 shooting effort.

Pikeville began to slowly cut into its deficit in the third quarter.

A jumper and a 3-pointer by Tackett cut Casey County’s lead to 29-24. The Lady Rebels’ advantage grew to 34-26 at the 4:48 mark after a 3-pointer by Stephens, but the Lady Panthers finished the period with a 4-1 run that made the score 35-30 with eight minutes remaining.

Trinity Rowe’s layup pulled Pikeville to within three points (35-32) of Casey County’s lead to open the fourth quarter, but a basket by Natalie Duggins and a 3-pointer by Lee pushed the Lady Rebels advantage to 40-32.

Pikeville continued to rally and cut its deficit to one point (47-46) with 18.7 seconds remaining after two free throws by Rowe but Lee sealed the win for the Lady Rebels with two free throws a couple of seconds later.