HCHS comes up clutch late, knocks off Clay in semis 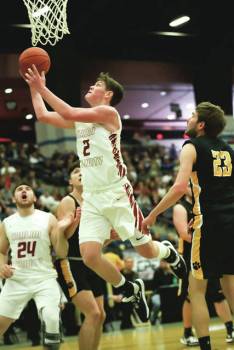 <p>Photo by Les Nicholson</p> <p>Harlan County point guard Trent Noah went to the basket for two of his 16 points in the Bears’ 65-58 win Saturday over Clay County in the 13th Region Tournament. Noah scored eight in the fourth quarter as HCHS pulled away for the victory.</p> 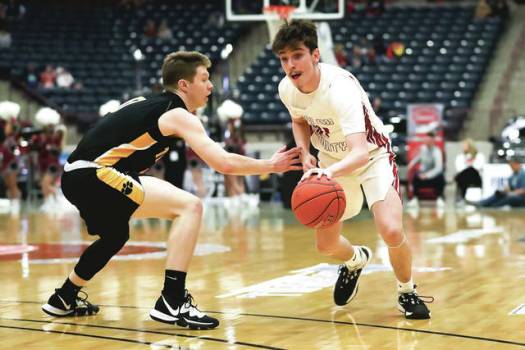 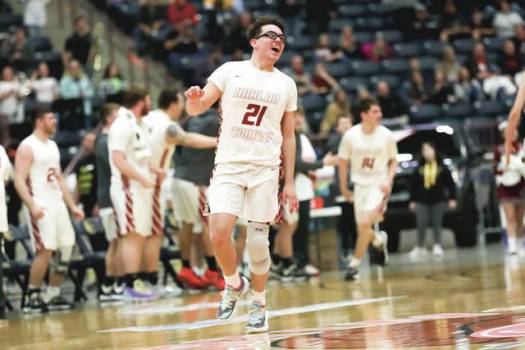 <p>Photo by Les Nicholson</p> <p>Harlan County senior Jacob Wilson celebrated late in the Bears’ regional tournament win Saturday over Clay County. HCHS will play in the regional finals on Monday at 7 against the winner of the South Laurel-Knox Central game.</p>

CORBIN — An eighth-grade point guard in the pressure-packed atmosphere of the 13th Region Tournament final four could be a recipe for disaster.

That was clearly not the case Saturday for the Harlan County Black Bears, and Trent Noah, who were at their best with the game on the line. HCHS hit seven of nine shots in the fourth quarter, led by three baskets and two free throws from Noah, to pull away for a 65-58 win over Clay County.

“They made the plays down the stretch and we didn’t,” Clay County coach Glenn Gray said. “(Noah) got down in there where we had a hard time doing anything with him. We did a good job with on-ball defense for most of the first half, but in the second half they started getting us on their hip and getting in the lane too much.”

“Trent was huge for us down the stretch. They had a hard time guarding him,” added Jones. “You won’t rattle him. He plays with the same demeanor all the time.”

“We didn’t make good decisions. We weren’t as aggressive on offense in the second half and we didn’t run our sets,” Gray said. “We went one-one-one or one-on-two too often when we should have relied on our sets. They did a good job of taking away our first option, but the second and third options were right there.”

Senior point guard Jacob Curry was the focus of the HCHS defense for much of the night and was limited to one-of-10 shooting for four points.

“Hats off to them because they pretty much took Curry out of the ballgame,” Gray said. “I thought he pressed a little bit. He’s a senior and wants to win and has had a great year.”

“We know Robinson is a great player and they really have no weaknesses, but Curry makes them go,” said Jones.. “We wanted to know where he was at all times.”

After shooting well in the first half, including five of nine from beyond the 3-point line, Clay cooled off in the second half. The Tigers led by five early in the quarter, but hit only six of 18 shots in the period as the Bears went on a 15-7 run to go up by three before a basket in the final minute of the quarter cut the deficit to 45-44.

Clay appeared tentative in the fourth quarter and scored only one Langdon free throw in the first three minutes as the Bears went up by four on baskets by Huff and Noah. A 3-pointer by Curry, his only basket of the game, cut the deficit to one, then Robinson gave Clay its last lead with a basket at the 4:01 mark. Wilson answered with a three-point play and HCHS never trailed again. Noah scored with 3:02 left, then again with 1:42 remaining as the Bears extended their advantage to 56-51.

Two 3-pointers by Farmer gave Clay an early lead, an advantage that grew to 13-7 midway through the period after five straight points from Jakob Begley and a basket by Langdon. Baskets by Spurlock, Cole and Noah brought the Bears to within two, at 15-13, by the end of the period.

Clay pulled out to an eight-point lead by hitting seven of nine shots to open the second quarter, led by four straight baskets by Robinson. A 3 from Huff kept the Bears close, then Noah scored on a drive to start a 6-0 run to close the half. Spurlock scored on a drive, then tipped in a miss in the closing seconds to cut the Clay lead to 31-30 by halftime.

“I thought Jackson kept us in the game in the first half with those three 3-pointers, then he had a huge basket in the fourth quarter,” Jones said. “Everyone who played has been big for us in this tournament. Cole and Spurlock have been so consistent, especially in the postseason, and Wilson has given us a big lift with his work on the boards and by hitting some big shots.”

Harlan County will play defending champ Knox Central on Monday at 7 p.m. for the 13th Region championship and a ticket to the state tournament at Rupp Arena.