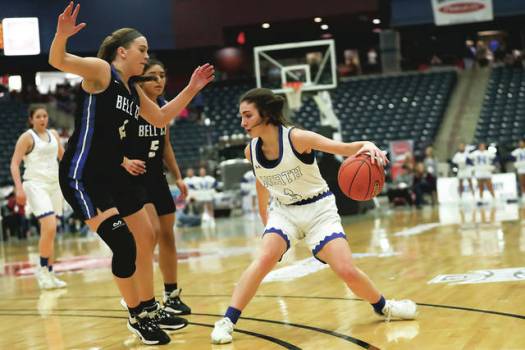 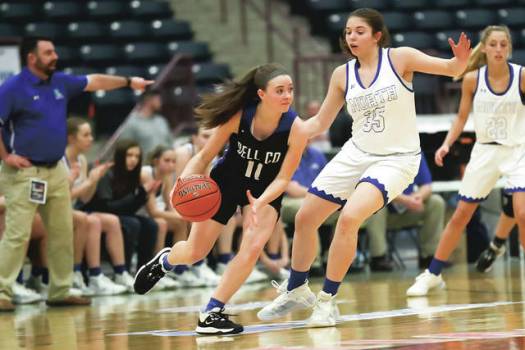 The Lady Jaguars opened Friday’s semifinal matchup with Bell County by scoring the game’s first 20 points and never looked back during their 68-37 victory.

The win sets up an much-anticipated matchup with crosstown rival South Laurel in today’s championship game, which is scheduled for a 7 p.m. start.

”They have a tremendous amount of talent and I’m glad that we finally get to play,” North Laurel coach Eddie Mahan said of his team’s game against South Laurel. “You’re going to have two tremendous teams playing. It’s either going to be a knock-down-drag-out, or it’s going to be a blowout. Both teams have that ability — that’s what you have. Whoever shoots the ball well will come out on top tomorrow.”

“ I thought our kids came out focused and ready to go,” Mahan said. “They’ve got more energy right now and they’re trying to get back to Rupp.

Collins let her presence be known early in the first quarter. She tallied 11 points while Hailee Valentine added seven points to help North Laurel to a dominating 33-6 lead.

”She’s a special player,” Mahan said of Collins. “Some times, I forget that she’s only a seventh-grader. She set the tone early and came out focused and hit the 3-pointer and then scored some quick baskets.”

North Laurel (28-4) continued to dominate in the second quarter, outscoring Bell County 13-8 while building an insurmountable 46-14 advantage at halftime.

An early 3-pointer to begin the third quarter put the running clock into effect for North Laurel, which allowed Mahan to rest his starters.

The Lady Bobcats (25-5) outscored the Lady Jaguars 23-22 in the second half but dug too big of a hole during the game’s first 16 minutes.

The Lady Cardinals (25-6) dominated from start to finish, using a 31-12 run in the third quarter to put James Burchell’s Lady Tigers away.

South Laurel hit 30-of-53 shot attempts, including a 20-of-34 effort from 3-point range. The Lady Cardinals were one 3-pointer shy of tying Louisville Moore’s record of 21 3-pointers.

“We came out and did what we set out to do tonight,” South Laurel coach Chris Souder said. “Coach Burchell is a great coach and he did exactly what we thought he was going to do. It’s hard to get the kids to understand that it’s not going to be like it was the first time we played them.

“We hit 20 3-pointers and on a lot of those, we were wide open,” he added. “They decided to leave Bri and Clara open and they knocked down the shots. Amerah, Ally (Collett) and Sydnie (Hall) didn’t score a lot and some of the other girls stepped up and it showed the progression of the program.”

“North Laurel has a great ball club,” Souder said. “We’re not going to make 20 3-pointers tomorrow. We just need to go out and play our best basketball, have fun and see what happens.

“This is my second year here, and we are trying to enjoy this,” he added. “I know in year’s past, they’ve had trouble getting past this point. I know the girls probably had in the back of their heads that this is where we get beat every year, but they came out and played well. We tell them to do the best you can and whatever happens, happens.”

South Laurel’s Howard set the tone early by connecting with three 3-pointers in the first quarter. The Lady Cardinals were clinging to a 19-18 advantage until Steele’s 3-pointer at the buzzer gave South Laurel a 22-18 advantage.

Souder’s squad turned things up a notch in the second quarter as Steele’s 3-pointer to open the period pushed her team’s lead to 25-18. Collins’ shooting behind the arc allowed South Laurel to stretch its advantage to 37-22 with 2:50 remaining.

The Lady Cardinals took a 39-27 lead into the locker room at halftime with Howard’s 12 points leading the way. Steele delivered 11 first-half points while Collins had nine points.

South Laurel hit 14-of-24 shot attempts in the first half, including an 11-of-19 effort from 3-point range.

Clay County shot 10-of-16 from the floor while Kaylee Mathis led the way with nine of her 23 points during the first 16 minutes.

Souder’s squad continued where it left off in the first half by opening the third quarter with a 16-1 run.

Clay County outscored the Lady Tigers 19-16 during the fourth quarter.