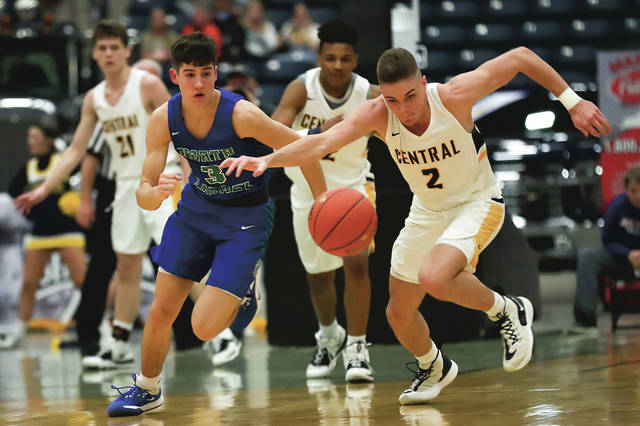 CORBIN — While being a defending regional champ isn’t worth any actual points on the scoreboard, there may be something to the mindset it can bring, especially for a team like Knox Central. The Panthers broke a 49-year regional championship drought last season with a win over North Laurel in the finals. That experience may have paid off Thursday in the rematch in the opening round. Knox rallied from a six-point deficit in the fourth quarter to advance with a 66-64 victory.

North Laurel coach Nate Valentine pointed to a couple of key stats in the loss, especially free throws (five of 11) and a 37-28 deficit on the boards.

Freshman Reed Sheppard and Ryan Davidson led the 22-10 Jaguars with 25 and 18 points, respectively, but both missed key shots down the stretch when Knox rallied. Two Mills free throws with 1:32 left gave Knox a 62-61 lead. Davidson missed two shots in the paint on North’s next possession, then Sheppard missed twice at the line after Mills pushed the lead four. Patterson found Jevonte Turner for a basket that extended the KC advantage to five.

A Sheppard 3-pointer cut the deficit to two, then North fouled Patterson with 1.6 seconds left. Patterson missed both free throws, but Sheppard’s shot from halfcourt was off the mark.

“It’s a big atmosphere and a big moment in a high level game,” Patterson said. “Both teams went through stretches where they couldn’t make shots, but our kids didn’t quit, and that’s a really good trait to have. They have a lot of heart.”

“They run that 2-2-1 three quarters and we worked on that for three days,” Patterson said. “We weren’t attacking it. We had to call a timeout, settle them down and remind them what they were suppose to do. We finally got an easy bucket, then it was easy for them from then on.”

Knox took a 6-0 lead on 3s by Jevonte Turner and Kevionte Turner before North reeled off 11 unanswered points, led by three baskets from Davidson. A Patterson 3 cut the deficit to one before Isaiah Alexander answered to extend the Jaguars’ lead to 17-13 after one quarter.

The lead changed hands on four straight possessions midway through the second period. Baskets by the Turner brothers and a 3 from Patterson put the Panthers up by three before Davidson and Caden Harris closed the half with baskets to put North on top 34-33 at the break.

The lead changed hands five more times to start the third quarter before Knox was able to build a five-point lead on two occasions. Baskets by Davidson and Noah Black pulled the Jaguars within one, at 49-48, going into the final period.

North loses two senior starters in Kelley and Alexander and a couple of key reserves but will have a solid corps returning, led by the region’s top two freshmen.

“We had two freshmen and a sophomore out there tonight. Hopefully, they will continue to learn and continue to grow and this will fuel them going into next season,” Valentine said.