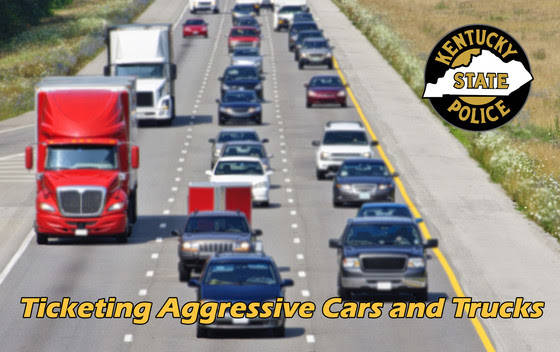 “Many preventable crashes result from unsafe driving behavior such as speeding, distracted driving and following too close. Often times, we see this on our highways when motorists and commercial vehicle drivers struggle to share the road,” said Sergeant Jason Morris.

For this reason, KSP is kicking off the Ticketing Aggressive Cars and Trucks (TACT) Blitz on March 1, which will target drivers (both passenger car and commercial vehicle) who exhibit aggressive behaviors such as improper lanes changes, speeding, following too closely, not leaving enough space to pass and failure to yield the right-of-way.

In 2019, there were 6,147 crashes involving commercial trucks on Kentucky roadways resulting in 88 deaths.

Commercial Vehicle Enforcement Division Director, Major Nathan Day, said the agency will use social media, radio and other forms of public outreach to educate the public on the dangers of aggressive driving.

“Along with high visibility enforcement, we will use media outreach to educate drivers,” said Day. “It’s not about writing tickets. It’s about saving lives, and at the end of the day, we want everyone to arrive to their destination safely.”