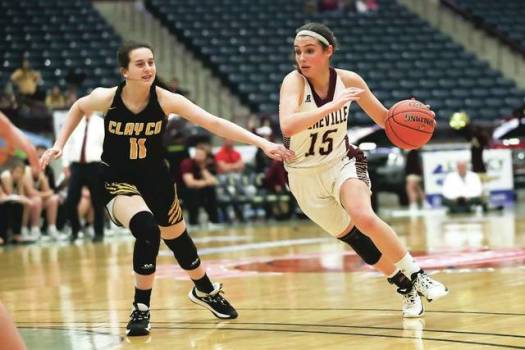 <p>Photo by Les Nicholson</p> <p>Pineville junior guard Whitney Caldwell drove to the basket against Clay County’s Jaylen Combs in the 13th Region Tournament opener Monday in Corbin. Caldwell scored 11 to lead the Lady Lions, who closed the season at 17-11 after falling 38-28.</p> 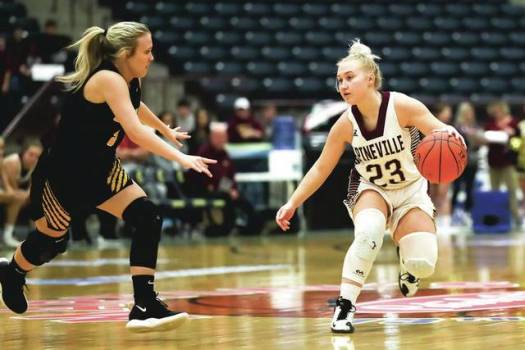 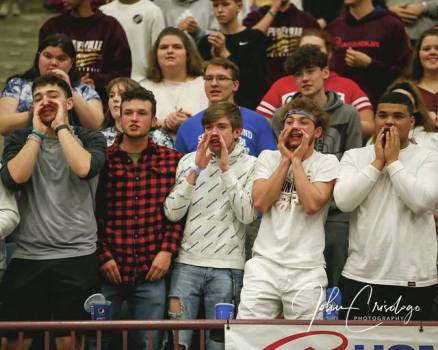 <p>Photo by John Crisologo</p> <p>Pineville fans cheered on their Lady Lions during the 13th Region Tournament on Monday at The Arena in Corbin. Pineville fell 38-28 to end one of the best seasons in school history. The Lady Lions won the 51st District Tournament title last week.</p>

CORBIN — After suffering through his share of hard-fought losses in the 13th Region Tournament during his 14 seasons as coach, Clay County’s James Burchell wasn’t going to feel bad after his Lady Tigers struggled through a 38-28 win over Pineville on Monday in the opening game of the tournament at The Arena.

“I’ll take an ugly win over a pretty loss any day,” said Burchell, who has led Clay to five regional titles. “We’ve been up and down on offense all year, but I think the jitters of the regional tournament gets in these kids’ heads. You have to give them some credit though. I thought both teams played hard on defense and made it difficult for the other team to score. They took us out of our offense, but I thought we took them out of theirs. That’s the kind of game it was.”

“We knew they would slow it down and play that kind of ball, but we didn’t run the sets like we wanted to,” Pineville coach Jamie Mills said. “There were times we rushed it and didn’t get a good look. They were running their sets on the other end, and I told them we had to do the same. We got out of that a little bit and got caught watching too many times on our shots. We weren’t rebounding and pounding the boards like we wanted to. We also missed enough free throws (seven of 14) to be in the game, and we had been shooting them well in the district tournament. I guess we were around 90 percent, but you get to The Arena and the regional and it’s a different atmosphere.”

Clay went over six minutes without scoring in the third quarter as Pineville slowly turned a six-point halftime deficit into a 19-17 lead with 2:12 left in the period after two Whitney Caldwell free throws. A basket by Clay center Alexis Lewis ended the drought, then point guard Taylor Asher scored off a steal to give the Lady Tigers a 21-19 lead going into the fourth quarter.

Pineville had only one basket in the opening five minutes of the final period as Clay’s lead grew to 32-22. The Lady Tigers put the game away at the free throw line, even though they shot only 54 percent (13 of 24) for the game. Kaylee Mathis, a senior guard, hit four of six at the line in the final minute.

Asher led the 18-13 Lady Tigers, with 15 points. Mathis scored 13. Junior center Alexis Lewis added 10 points and seven rebounds while making it tough for Pineville to score around the basket.

Caldwell scored 11 to lead the 17-11 Lady Lions, who won the 51st District title last week for the first time since 2016. The Lady Lions bring back four starters for their senior seasons next year and will likely be the regional All “A” favorite and a co-favorite in the 51st District with Knox Central.

“We won the district and this is the fifth year in a row we’ve had a winning season,” Mills said. “We hope we can get back here next year and give it another shot. We’ll be all seniors next year, and now they have a taste of it and know what it takes.”

The victory was the first regional tournament win for Clay County since 2015. Next up is 13th Region favorite South Laurel on Friday in the semifinals.