Black Bears back on top in 52nd District 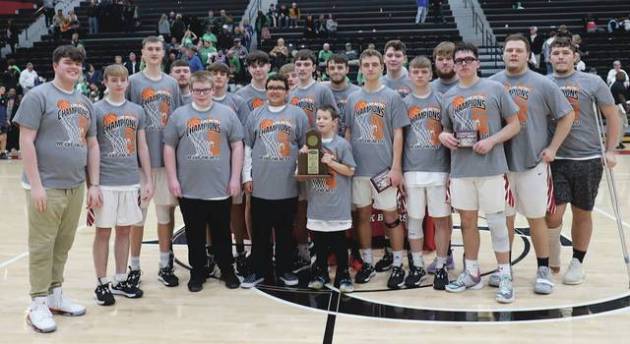 <p>John Henson | Harlan Enterprise</p> <p>Harlan County captured the 52nd District Tournament title on Friday with a 58-54 victory over Harlan. It was the fifth title in six yars for the Bears.</p> 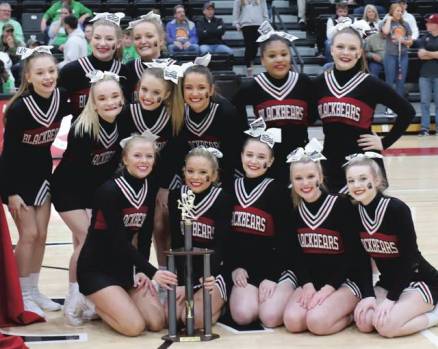 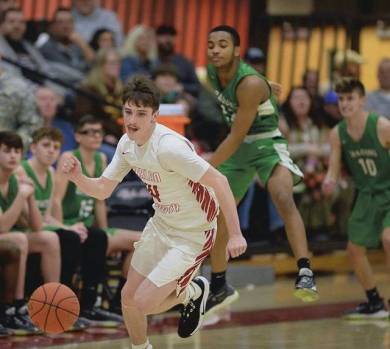 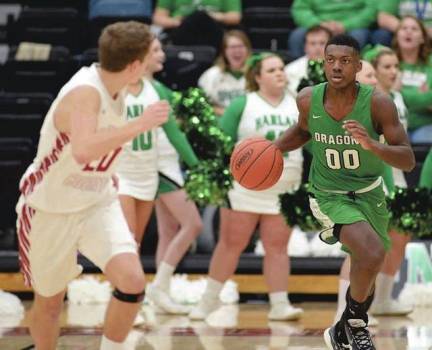 With four 52nd District Tournament titles in his first four years as coach, Michael Jones and the Harlan County Black Bears may have started to take the championships for granted, at least until losing to Middlesboro in last year’s first round and sitting home for the regional tournament for only the second time in school history.

The Black Bears were in a mood to celebrate on Friday after holding off Harlan 58-54 in the tournament championship game.

“I’m proud of the way the kids responded coming off a first-round loss last year,” Jones said. “Except for the dead period, someone has been in here working every day since last season ended. They have really competed all year.”

Defense may have been the difference in the game as Jackson Huff and Josh Turner took turns guarding Harlan star Jordan Akal in the Bears’ box-and-chaser. Akal scored 18 points, well below his average, and was limited to one 3-pointer.

“Jackson’s and Josh’s defense on Akal was phenomenal,” Jones said. “I told them in practice yesterday we couldn’t let him get 30 or 40. We face guarded and kept a hand in his face. He’s one of the best in the region, but I’m proud of the way kids made it difficult on him.”

“They specialized their defense to face guard him, so they gave us a different look,” Harlan coach Derrick Akal said. “We did have some other guys step up and they all played hard. We just didn’t have some shots fall, especially late in the game.”

Harlan County (22-10) featured a balance offensive attack, led by senior guard Taylor Spurlock, who celebrated his 19th birthday with an 18-point effort. Spurlock hit three straight shots in the fourth quarter to spark an 8-2 run that put the Bears ahead to stay after Harlan tied the game at 44 with 6:22 to play.

“He took over. I guess he was tired of me yelling at him when he ran by,” Jones said. “He was real aggressive on the offensive end, and I’m proud of him for that. He had a hard road in the district tournament the last two years, so I was proud of the way he stepped up tonight and showed why he is one of the best players in the region.”

Eighth-grade point guard Trent Noah had 15 points for the Bears. Junior Tyler Cole, the tournament most valuable player, added 14 points after an 18-point effort on Tuesday against Bell County. Noah, Cole and Jacob Wilson each hit two free throws in the final two minutes after Harlan had pulled within two. Harlan hit only six of 16 shots in the final period.

“We played hard enough to win, but the shots just didn’t fall late in the game,” Akal said.

Harlan needed a little over three minutes to wipe out the deficit with a 10-0 run to open the second quarter. Kaleb McLendon hit two 3-pointers in the run as the Dragons went up by four. Cole and Spurlock scored for the Bears as HCHS took a 23-22 lead into the break on a Spurlock jumper.

It was the fourth straight district runner-up finish for the Dragons under Akal, who hadn’t made it to the regional since 2005 before the current run began. Harlan loses only two seniors this season and starts four sophomores. Akal likes the progress his young team made this season, which included the program’s first All “A” Classic regional title in 18 years.

“One of the things we wanted to be was relevant in the region, not just whether or not we could beat HC (the Bears have won all 29 meetings since HCHS opened in 2008),” Akal said. “We haven’t beat them, but we are relevant. I think we proved that with three really good basketball games this year against them. That’s a step up from where we were. A lot of our guys gained some valuable experience this year, but they still have to learn to win. I’m still myself learning how to coach this basketball team. I’m optimistic about where we are going.”

Both teams advance to the 13th Region Tournament, which opens Wednesday at The Arena in Corbin.