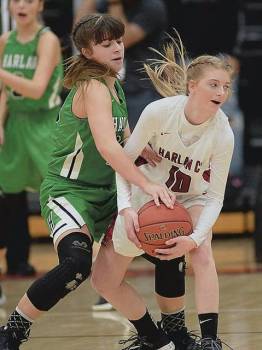 <p>Chris Jones | Harlan Enterprise</p> <p>Harlan County guard Jaylin Preston battled with Harlan’s Emma Owens during the 52nd District Tournament on Monday. Preston scored 17 points, one day after the death of her mom, to help lead the Lady Bears to a 73-65 win and a berth in Thursday’s championship game.</p> 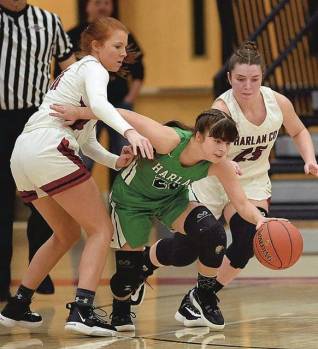 <p>Photo by Scott Warren</p> <p>Harlan County’s Jaylin Preston was comforted by teammate Hannah Wood after the Lady Bears defeated Harlan 73-65 on Monday in the opening round of the 52nd District Tournament. Preston scored 17 points to lead HCHS, one day after the death of her mother.</p>

One day after losing her mom, Harlan County sophomore Jaylin Preston played the game of her young life Monday in the opening round of the 52nd District Tournament at HCHS. Preston scored a career-high 17 points and hit four clutch free throws in the final minute as the Lady Bears held off Harlan 73-65 in a physical game that featured 62 fouls and 94 free throws.

“With what JP has been through, it was pretty amazing. She really stepped up and made a difference tonight,” Harlan County coach Debbie Green said. “She had a lot of poise on free throws and forced some turnovers. She has come a long way this season. I feel so bad for her. The team has rallied around her. She knows this is where her mom wants her to be.”

Donna Zunda Preston, a former track star at Evarts High School, died unexpectedly Sunday. Preston, an assistant coach at Evarts, always sat behind the HCHS bench and was very close to the team and other fans.

“They.had to deal with a lot of adversity this week, and I think that speaks to their mental strength,” Harlan coach Tiffany Hamm said. “You hope your team develops the personality of their coach and Debbie is a strong woman who rallied them in a difficult situation. They are a well coached team. (Morgan) Blakley plays so hard and (Jaylin) Smith really stepped up and handled the ball for them.”

Smith scored 19 points to lead the 16-10 Lady Bears, who will play Bell County on Thursday at 7 p.m. in the district finals as HCHS seeks its fourth straight championship. Blakley added 12 points, while Kassy Owens contributed 11 points and 14 rebounds.

“Jaylin hit some big free throws and stepped up and handled the ball,” Green said. “Dixie (Ewing) was huge for us with how hard she played and her rebounding. All of them did something well.”

Harlan (11-18) continued to play hard, especially on the defensive end, and forced 23 turnovers. Harlan turned the ball over 27 times.

“It was ugly once again, but we’ll take ugly and a win any day,” Green said. “It’s a rival game and Harlan plays very hard. We have a lot of kids who haven’t played a big role before this year in games like this. They are doing the best they can and handle the pressure. I was real pleased we did handle it down the stretch. We just missed some many free throws (14) in the first half and put them on the line too much.”

“These girls play hard, and I appreciate that about them. They have been fun to watch the last few weeks,” Hamm said. “Our young guards both played really well. We missed some easy buckets, but there were a lot of fouls.There were around 100 free throws in the game, and I don’t know if it should have been 60-40…”

After falling behind 5-0, Harlan County reeled off 12 unanswered points and built an 18-8 lead after one quarter as the Lady Dragons turned the ball over 12 times. HCHS hit only four of 17 shots in the period, due in large part to at least five blocks by King.

Harlan County led by seven late in the half before Owens and King sparked an 11-4 run to tie the game at 32. A basket by Blakley and free throw from Ewing gave the Lady Bears a 36-34 halftime lead.

Preston and Owens each had three baskets for HCHS in the third quarter as the Lady Bears stretched their lead to 52-45. The Lady Bears had only one turnovers in the quarter after turning it over 15 times in the first half.

The Lady Bears led by 12 with two minutes left when Harlan made one final run, getting as close as three on a 3-pointer by Karst with 37.7 seconds left. Four free throws by Preston and two by Owens helped Harlan County close with a 6-2 run.