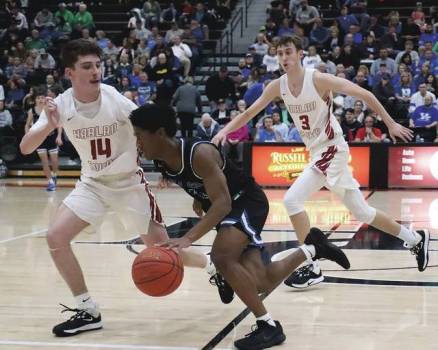 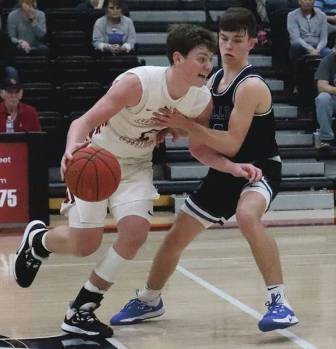 One year after being knocked out in the first round of the 52nd District Tournament for the first time in his coaching career, Harlan County coach Michael Jones had an idea what his Black Bears would face Tuesday in a tough first-round matchup against Bell County.

Bell executed a stall offense almost to perfection in the first half, building a six-point halftime lead. Harlan County responded with a 15-0 run to start the second half, then had to hold off a Bell County rally late to win 42-36 and earn a spot in Friday’s championship game against Harlan.

“I told people my only fear was the coach (Brad) Sizemore, and he’s a great coach, would hold it because he has the weapon (London Stephney) to do it,” Harlan County coach Michael Jones said. “I can say there was no panic in the locker room. The last two games, Whitley County and tonight, we’ve really played well in the third quarter.”

“We had a starter (Andrew Caldwell) hurt the last few games and been down a body, so we were trying to slow the game down and get into the half without being in foul trouble. We had foul trouble the last couple of times we played them,” Sizemore said. “We didn’t want to hold it the entire game, but we wanted to limit their possessions and keep our main guys on the floor. I thought our guys did a great job. We worked on it the last three days. They made a tremendous run to start the third quarter, but our guys responded and was able to come back. They made some big plays down the stretch, but I’m really proud of how our guys played tonight.”

Junior wing Tyler Cole had a big game to lead the 21-10 Bears, hitting seven of 11 shots in an 18-point effort. He also guarded Stephney in the second half and forced a crucial turnover.

“He was huge, absolutely huge,” Jones said. “I called one timeout so he could rest. I told the players in practice we were going to go to him. He was aggressive on offense and his defense on London was phenomenal.”

Stephney scored 16 to lead the 12-17 Bobcats in his final high school game.

The two teams combined for only six shots in the first quarter as HCHS took a 4-2 lead on baskets by Cole and Jackson Huff. Bell burned over two minutes off the clock on one possession and went back to the spread several times in the period.

Bell hit six of eight shots in a well-executed second quarter that saw the Bobcats go up by as many as seven. Dalton Stepp and Stephney each had two baskets in the period as the Bobcats took a 19-13 lead into the break. Cole had two of Harlan County’s four baskets in the quarter.

Harlan County owned the third quarter, scoring 15 unanswered points to take a 28-19 lead. Jacob Wilson and Taylor Spurlock hit back-to-back 3s in the run and Cole followed with two baskets. Dawson Woolum and Stephney scored to break a zero-for-nine start to the half and cut the deficit to 28-23.

The Bears turned the ball over five times in the fourth quarter as Bell pulled even on two free throws by Stepp with 4:07 left. Stephney put the Bobcats ahead, but Cole answered to tie it at 33. A three-point play by Noah gave HCHS the lead, but Stepheny tied it again with 1:34 to play.

Two free throws by Cole with 1:17 left put Harlan County ahead to stay. A free throw by Noah extended the lead to three. Stephney missed on a drive to the basket, then was assessed a technical with 14.7 seconds left. Two free throws by Wilson and one by Cole closed the scoring.

“I think you can attribute that to how mentally tough this bunch is, plus we work on game situations in practice,” Jones said of the Bears’ strong finish. “They are used to that in practice and stay calm in games.”

Bell County graduates only two seniors and Sizemore is confident the Bobcats will continue improving.

“I know people look at records, but I’ve told the kids all year that if you compare schedules to what they have played in the past we have played a really tough schedule and lost some close games. We wanted do it to see if our kids would respond and get better. I think they have,” Sizemore said. “We play five sophomores and have only two seniors. We have a lot of work to do to take the next step and play with these better teams in our region, but I think it’s been a good year. They kids have worked very hard and I’m proud of them.”