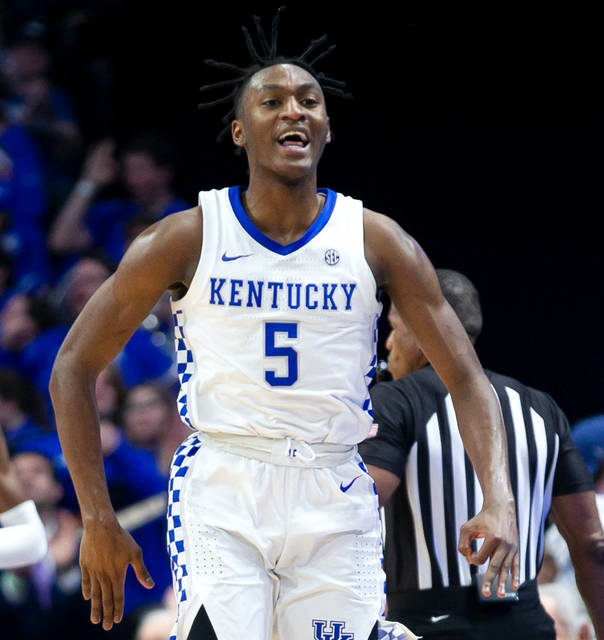 Immanuel Quickley scored 22 points in the second half to lead Kentucky to a 65-59 win over Florida on Saturday night at Rupp Arena.

LEXINGTON (KT) — Immanuel Quickley got the message and delivered for No. 10 Kentucky on Saturday night.

The sophomore guard scored a career-high 26 points to lead the Wildcats to a 65-59 triumph over Florida, giving Kentucky its sixth consecutive victory with two weeks remaining in the regular season. Kentucky holds a two-game Southeastern Conference lead over Auburn and LSU with four games remaining. The Wildcats (22-5, 12-2) close out the regular season at Florida on March 7.

After scoring just four points in the first half, Kentucky coach John Calipari challenged Quickley to take more shots in the second half or face the consequences. Quickley then started playing freely and started looking for his shot as opposed to creating plays for his teammates.

“I grabbed him at halftime,” Calipari said. “I said, ‘If you don’t shoot open shots, I’m putting Johnny (Juzang) in, because I know he will shoot every shot. You don’t, and if you miss them, get in the gym tonight. I don’t know what to tell you.

“You can’t be a team that wants to play deep into March and have guys passing up wide-open shots to take a tough shot because they want it to look harder in case I miss. If I miss I kind of get embarrassed … you can’t have that mindset, and today we didn’t.”

Quickley opened the second half in a flurry, scoring 15 of the team’s first 19 points. He sank three consecutive 3-pointers to help the Wildcats overcome a seven-point deficit. Quickley sparked a 19-4 run with a three-point play and had another during the decisive spurt.

“When you see a couple of (shots) go down, it helps,” Quickley said. “My teammates do a great job of finding me when I’m hot.”

Quickley’s second-half start gave the hosts a boost and his 3-pointer that bounced off the front of the rim with 1:34 remaining to stretch the margin to 61-53 was even bigger. Florida closed the gap to 61-59 with 17 seconds remaining by forcing careless ballhandling by the Wildcats, but Maxey and Quickley sealed the deal with four straight free throws in the final 12 seconds.

Maxey wasn’t surprised by Quickley’s performance against the Gators down the stretch.

“It’s a testimony to his work,” he said. “Coach got on him in the first half and said he was passing up shots and (told him) he was taking him out. I think he got the message. … I was proud of him like always.”

In addition to his heroics against the Gators, Quickley has scored 93 points in the second half of Kentucky’s last six games. He has led the team in scoring in three consecutive games and become the first player to collect more than 20 points in back-to-back games this season.

Florida coach MIke White said Quickley was “fantastic” and the “the best player on the floor.”

“I thought he did a great finding space (and) searching,” White said. “They did a good job of finding him. (He) hit huge shots and complemented that with terrific defense in the perimeter.”

Kentucky junior Nick Richards and Ashton Hagans were listed as doubtful prior to the contest. Richards started and finished with nine points, while Hagans came off the bench and scored seven points. It marked the first time this season Hagans wasn’t in the starting lineup.

Quickley said the Wildcats will be “trying to continue to build for March” and try to “win a national championship.”