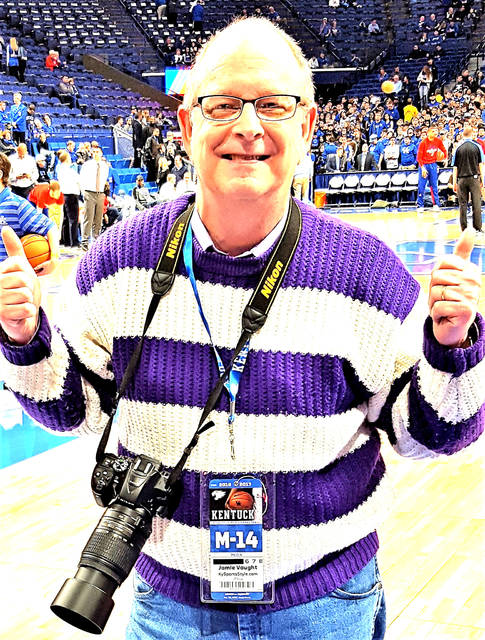 A college professor who is also known for his time spent in Rupp Arena moonlighting as a credentialed sports columnist in Kentucky has written another book spotlighting University of Kentucky Basketball.

The upcoming 256 page paperback by Jamie H. Vaught, who teaches at Southeast Kentucky Community and Technical College in Middlesboro, is titled “Chasing the Cats: A Kentucky Basketball Journey.”

Vaught wrote four books about University of Kentucky hoops during the 90’s and 2000’s and this is his first book release in 16 years.

Much like his previous books, Vaught’s newest volume features interesting profiles of individuals who are mostly former players and student managers who have strong ties with the Wildcat men’s program.

The interviews profiled in “Chasing the Cats” were conducted by Vaught who once worked for The Cats’ Pause magazine as a sport columnist for 13 years during his early days.

“This is an absolutely wonderful book and a must read for any Kentucky fan,” Paul Finebaum of the SEC Network and ESPN wrote on the back cover. “Jamie Vaught displays in ‘Chasing the Cats’ a brilliant insight to UK basketball and a beautiful writing style sure to please basketball fans everywhere. I don’t remember a book I have enjoyed more. Just a rich and riveting read.”

Vaught is a Somerset High School Graduate and grew up in Science Hill, Kentucky. In addition to his sports writing, he has taught in higher education for nearly 35 years and has been at SKCTC since 1991. He holds two degrees including a Master of Business Administration.

The book is scheduled to be released around February 22 and will be available online at Amazon.com, AcclaimPress.com, and others. It will also be available at major bookstores as well.

The publisher of the upcoming release is Acclaim Press in Missouri.

Book signings have already been lined up for late February and March during the March Madness in Middlesboro, Lexington, and Somerset.