Bobcats go 2-1 over the weekend 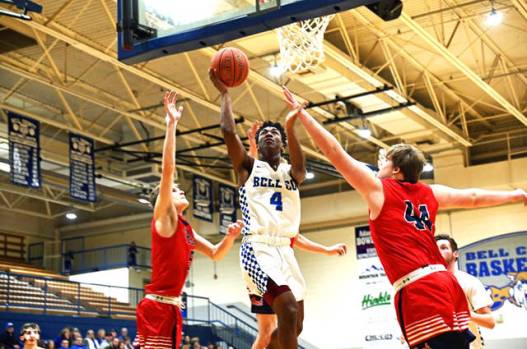 <p>Photos by Ray Welch | Daily News</p> <p>London Stephney gets through a trio of Rockcastle defenders on his way to the hoop during the Bobcats’ victory over the Rockets.</p> 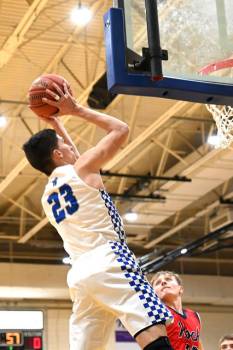 <p>Cameron Burnett goes for a basket during Friday’s game against Rockcastle County. He finished the night with 20 points and 11 rebounds.</p>

Bell County increased their win total by two over the weekend defeating Rockcastle County on Friday and Berea on Monday. Their only slip up over the weekend came against Williamsburg and former Bell County assistant coach Nick Napier. The weekend followed the recent trend for the Bobcats as the team has gone 3-2 over their last five games.

A strong performance from the Bell County defense kept Rockcastle County in check on Friday with the Bobcats rolling to a 64-48 victory over the Rockets. Bell was able to contain the visiting team to just 13 points in the first half while tallying 35 of their own.

Cameron Burnett paced the Bobcats reaching a double-double with 20 points and 11 rebounds. The sophomore forward finished perfect from the field going 7-for-7. He also was perfect at the charity stripe connecting on all six of his free-throw attempts.

It was Daniel Mullins that paced the Rockets offensively. He ended the night with 17 points while tying for a team-high five rebounds. Logan Noel, Jonathan Hopkins and Will Bishop tallied eight points apiece.

Bell County raced out to a 22-6 lead at the end of the first behind eight points from Burnett. The lead increased to 35-13 by halftime with Burnett adding six points to the stat sheet.

The duo of Burnett and London Stephney helped the Bobcats increase their lead to 54-24 at the end of the third. Burnett scored six points, while Stephney added four points in the period. Caldwell scored five in the quarter.

Despite outscoring Bell 21-9 in the final period, Rockcastle ended up losing by 16 points.

Major performances by London Stephney and Cameron Burnett were not enough on Saturday as Williamsburg defeated Bell County 76-73.

Stephney led all scorers with 27 points while going 11-for-19 from the field. He also went 5-for-6 from the charity stripe. Burnett scored 21 points during the game. He was two boards away from another double-double after hauling in eight rebounds.

Jonathan Wilson scored 12 points during the game, and Dawson Woolum finished with 11. Brandon Baker tied for a team-high eight rebounds.

Slaht Hunter paced Williamsburg with 23 points. Evan Steely finished the game with a double-double after tallying 11 points and 12 rebounds.

The Bobcats got back on track Monday during the President’s Day Shootout at Union College. The Bobcats once again showcased a strong defense in defeating the Pirates 68-43.

The trio of Cameron Burnett, London Stephney and Dawson Woolum helped propel Bell County to victory. Burnett ended the evening with a game-high 24 points while shooting 10-for-13 from the field. He also hauled in five rebounds.

Stephney scored 14 points, and Woolum added 13 more to the scoreboard. Brandon Baker paced the team in rebounds with six.

Berea was led by Jayden Smith with 15 points and 10 rebounds.