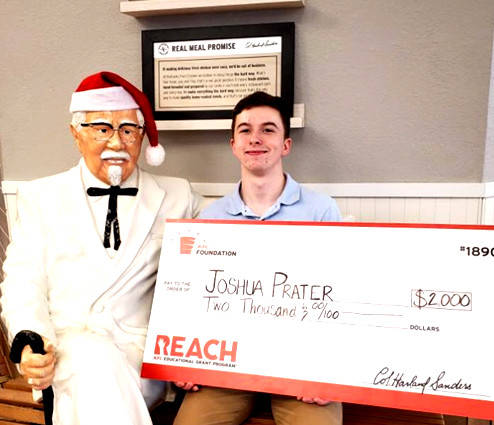 Hayden Prater will apply the Reach award he received through the KFC Foundation towards his studies at UK.

At 17, Bell County High School student Joshua Hayden Prater has had to grow up fast. Like thousands of local high school students, he has taken advantage of the dual credit opportunities at Southeast. Unlike most of them, he has done so despite being homeless.

From birth, Hayden has defied the odds. He began living with his grandparents in Dunlap as an infant after his biological mother went to prison for drug-related crimes. She has remained incarcerated throughout most of his life.

“I keep in touch with her occasionally,” said Prater. “But I can’t see us ever having much of a relationship.”

A self-described “troublemaker,” Hayden admits that although he always had an interest in science and math, he never applied himself academically.

During his 15th year, a series of events would change his perspective and the course of his life. His grandfather passed away. Shortly thereafter, their home burned to the ground, and his girlfriend announced that she was pregnant. That’s when, according to Hayden, he knew he had to step up.

For three months, he lived in his car while he attended high school, worked long hours at KFC in Middlesboro, and began taking dual credit courses through Southeast. Last fall, he completed 18 hours, and this semester, he has obtained special permission to enroll in 20+. Despite his heavy course and workloads, Hayden has found the time to participate on his high school robotics team.

Hayden has big plans for the year 2020. In April, he and his teammates will take to state competition a robot they built and coded using the Python language. In May, he will graduate from Southeast with an associate of arts degree. In June, he will graduate from high school. In the fall, he will enroll in the College of Engineering at the University of Kentucky to pursue a degree in chemical engineering.

“I am fascinated by taking raw materials and turning them into something useful – converting them into energy,” said Prater.

When asked how he would advise others in his situation who are considering dual credit, Hayden says that his “brutal schedule” has helped him cope and stay focused on his goals. He says that he strongly recommends it for any high school student who aspires to go to college because it “gets you super ahead of the game for a very low

While Prater’s boundless energy and responsibility towards his now two-year-old daughter Ella have motivated him, he acknowledges that many mentors have helped him along the way. Recently, he began living with science teachers Lauren and Eric Good, their three daughters, and their pre-school foster son. He considers them to be his adopted parents and credits them with reigniting his lifelong passion for science and math.

One day in the distant future, he says, he wants to pay it forward. “I want to adopt or foster someone in my situation,” he said. “That’s what is important in life—giving people hope when they have none.”

To learn more about dual credit and other opportunities at Southeast, visit https://southeast.kctcs.edu/