UK not among early top NCAA seeds but Cats not panicked 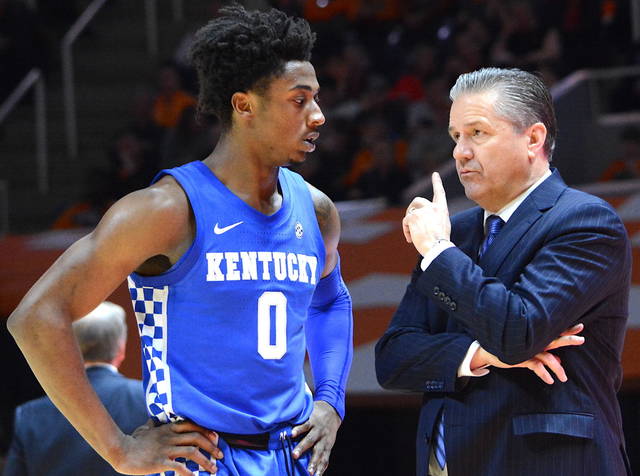 LEXINGTON, Ky. (KT) — Kentucky wasn’t among the teams listed when the NCAA Selection Committee released its top 16 seeds Saturday but the Wildcats aren’t in a state of panic with a month remaining in the regular season.

“I’m not really worried about it,” said Wildcats guard Johnny Juzang, who scored 13 points in a 77-64 win at Tennessee Saturday. “We’ve still got time. We’ve had some losses throughout the season (but) it’s what you do toward the end of the season (that counts).

“I feel like we’re getting a lot better and keep improving. It’s still early February and so, as long as we keep improving and keep getting better, I know we’re all working hard. I’m not worried about it.”

Kentucky coach John Calipari was surprised the Wildcats were left out of the 16-team field.

“We probably won’t talk about it,” he said. “We didn’t expect anything. I thought we could have been a No. 1 seed, but that’s just me — it is what it is.”

The seeds, broken down into the top four in each region, featured overall No. 1 seed Baylor (South), Kansas (Midwest), Gonzaga (West) and undefeated San Diego State (East) atop the early bracket.

“There was no question that San Diego State was a No. 1 seed,” said Kentucky Athletics Director Mitch Barnhart, vice-chair of the Division I men’s basketball committee. “They’ve had a remarkable year, and we had an opportunity, a couple of us, to watch San Diego State in person when we were on the West Coast for the NCAA convention, and they were incredibly impressive, and they have obviously had a wonderful, wonderful start to their season.

“It was razor close between Gonzaga and San Diego State. Gonzaga had a couple of wins just slightly better than San Diego State’s with a win over Oregon and Arizona, and that was just the razor’s edge difference between the two.”

Two of the teams Kentucky has beaten this season — Louisville and Michigan State — were listed in the field of 16 teams. NCAA Director David Worlock said the Wildcats’ loss to Evansville early in the season blemished Kentucky’s tournament resume. Barnhart wasn’t in the room or part of the conversation when Kentucky was discussed by the committee.

“From a positive standpoint, from Kentucky, were some of the performance in the non-conference, specifically a road win at Texas Tech and a neutral court win over Michigan State, to go with the home win over Louisville, so they have three high-quality non-conference wins that certainly helped Kentucky,” he said. “And as far as the negative were some of the losses, the loss to Evansville specifically, was probably enough to keep them on the outside of the first four lines, but again, along with some of the other teams that have been mentioned, Iowa and LSU and a couple of the Pac-12 schools that were mentioned previously. They certainly received consideration, as Mitch (Barnhart) alluded to.

“There’s plenty of opportunities for all those teams to get quality wins before the end of the season and potentially move up into that top four lines.”

The movement began Sunday after three of the top 16 seeds lost. West Virginia fell to Oklahoma, Oregon lost to Oregon State and Michigan State dropped a nine-point decision to Michigan.

Tennessee coach Rick Barnes was impressed with Kentucky after the Wildcats knocked off the Volunteers for the first time in four years Saturday in Knoxville.

“They are a very hard team to guard,” he said. “They know what they are looking for in their offense. They do a good job of trying to spread the ball around. They are very solid defensively. When you’re talking about fatigue, I thought both teams were tired. I saw their team walking to the bench as well as our guys. They have more guys that can drive the ball than we do and they do a good job of attacking that way.”

Although his team was left out of the initial early reveal, Calipari likes the idea of giving teams an early idea of where they stand ahead of Selection Sunday.

“I’m glad they’re doing what they’re doing,” he said. “It’s not just the top four seeds … It just kind of holds you accountable. That’s why I liked it being done. If you’re 13 and you win eight out of nine and you go to 22, why did that happen? You can’t do that now. Or, if you’re 12 and you lose – ‘Well, they lost but that’s different because of where they are in their league and all that.’ You can’t do that now. I like it. Put it out. Let us finish the season. Let’s see who does what and go from there.”