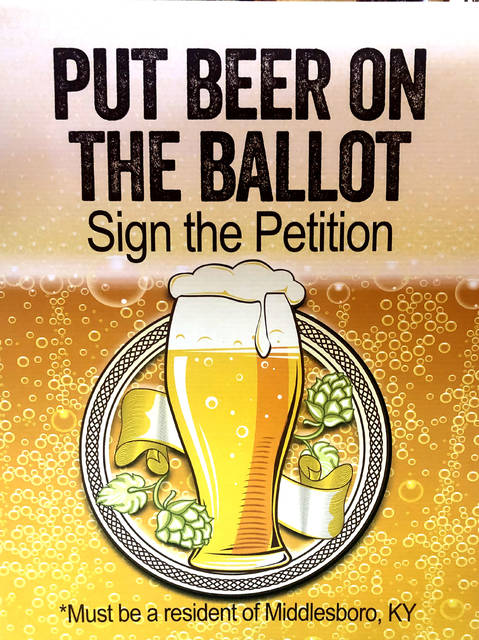 A sufficient amount of signatures on the petition for the wet vote to be put on the ballot could be moving forward.

Sufficient number of signatures could place wet vote on May ballot

A petition to have a vote on full alcohol sales in the city of Middlesboro has received the sufficient number of signatures to be added to the ballot in the May election.

The only way the issue won’t make the ballot is if 94% individuals swear under oath that their signature is invalid.

A few years ago a group of citizens created a petition for a question about alcohol to be placed on the Middlesboro ballot during a local option election.

At the time, the question of would the citizens be in favor of alcohol being sold in restaurants meeting eligibility requirements was met with support. The voters spoke and it passed, making the city “moist.”

In early January another group known as the “Citizens for a Progressive Middlesboro” submitted a letter of intent to distribute a petition in regard to basically upgrading the moist status to “wet.” This move would allow alcoholic beverages to be sold at grocery stores, standalone stores and convenience stores within the city limits of Middlesboro but with a limit on how many licenses could be issued per KRS.

It’s a move than many in the community say “is long overdue” but state statute mandates that a question of this nature cannot be placed on the ballot within three years of the last similar election. The tax revenue from the sale of alcohol goes to the local police department in order to enforce the laws of the land.

The organizers of the movement are pushing for the May 19 primary election to have the question on the ballot. Each name was checked by the clerk’s office for authenticity before being sent to county attorney Neil Ward and for approval, the names have now been sent to Bell County Judge Executive Albey Brock.

The petition was circulated throughout the city and the deadline to submit was Jan. 28.