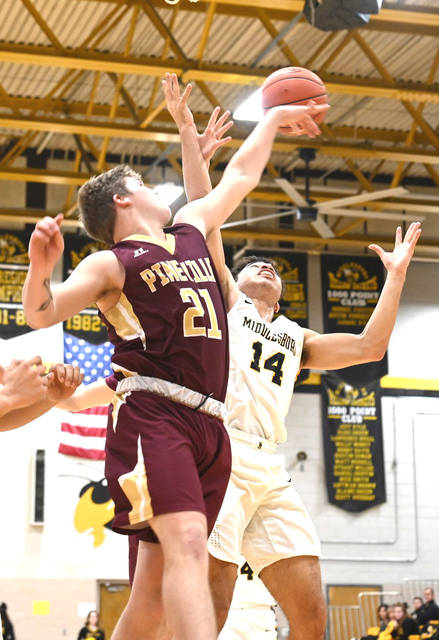 Pineville’s Tristian Hibbard blocks a shot during the Mountain Lions’ game against Middlesboro.

The duo of Clay Goodin and Sean Phipps helped propel Pineville over Rockcastle County on Tuesday. The two combined for 33 points in the Mountain Lions’ 56-53 victory.

Goodin finished the game with a game-high 17 points while going 7-for-14 from the field. He also shot 66.7 percent from the free-throw line and hauled in eight rebounds.

Rockcastle was led by Will Bishop with 16 points. Daniel Mullins wasn’t far behind with 15 points.

Cameron Burnett led Bell County to a 55-50 victory over Barbourville on Tuesday. The sophomore forward ended with a game-high 21 points to help end a four-game losing streak. He went 10-for-12 from the field.

London Stephney aided in the effort scoring 13 points off five field goals. He also went 3-for-4 from the free-throw line and hauled in four rebounds.

Jordan Collins paced Barbourville with 14 points. Matthew Gray tallied 12 points while shooting 71.4 percent from the field. Jonathon Mills paced the team on the board with eight rebounds.

The Lady Cats have been a team on a hot streak lately, but the Knox Central defense was able to contain Bell County on Tuesday. With four shooters in double digits, the Lady Panthers defeated Bell County 59-46 — ending a five-game winning streak.