State of emergency issued for Bell County; Historic moment as floodgates are closed for first time 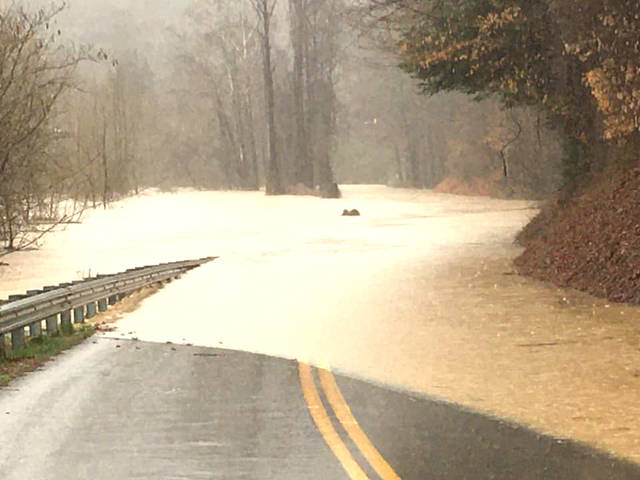 The north entrance to Meldrum was completely covered with water in the early morning hours on Thursday.

Thursday was a historic day for Bell County following Judge-Executive Albey Brock declaring a State of Emergency for the county as Pineville closed the flood gates for the first time.

“It was 30 years ago, in 1989 right here on this parking lot, we held the dedication for this flood wall and taking over the whole flood control for the Pineville area,” Pineville Mayor Scott Madon explained. “Here we are 30 years later closing the floodgates for the first time. I’ve often wondered would we ever, and we’ve got close in 2017. We got real close to close the gates, but we didn’t but we were extremely close.”

“What we are going to do is the river is still rising but has slowed down considerably. So to try to create the least amount of disruption on the public, we are going to close the low end,” said Brock. “We are going to put all the traffic into the southbound lane and do that as long as we can and then we are going to shut the whole thing down.”

Bell County Emergency Management Director Ben Barnett explained that in his time at emergency management that he didn’t think that he would see the day that the floodgates would be closed.

“It’s a record and who would think that we would even be in the neighborhood of it, but we’ve been close here two or three times to closing and that’s actually been surprising to me,” he said. “It’s unbelievable the amount of steps you’ve got to go through. Transportation has got to be notified, CSX has got to be notified, and they turn on billboards up and down I-75 and I-81 and in Tennessee TDOT has to be notified. It’s a huge ordeal and it is a lot of work, but it’s a protocol that we have in place and we go through and check all the list until we get it done.”

Barnett said that he was notified at 10 p.m. Wednesday that the river was rising.

“Around 10 p.m. (Wednesday), I got my first notification that the river was on a three foot rate of rise,” he said. “Automatically, it was a trigger and our emergency services have been out doing water rescues, we’ve shut down roads, and we’ve answered maybe thousands 911 calls.”

According to Brock, the rate of rising has slowed down considerably, but the river is rising about seven inches an hour. Brock says they know that they are going to gain a couple of feet from the runoff from Harlan following the cresting at approximately 1 p.m., but he said that was a good sign for Bell County.

“Will that cause it to breach the wall, no, but that will be lapping it up there pretty close and we don’t want to take that chance,” he said. “For the folks in Wallsend, if you are in there, we are giving you a voluntary evacuation notice. In the event that we reach a certain threshold, we will have to make it mandatory.”

Brock said they do not want to make it mandatory but in the case that shelter is needed, he said to go to the hospital. If transportation is needed, they will make sure that a ride is provided and assures the community that the situation is under control.

“If it looks like it’s going to be a mandatory evacuation, we will have overnight accommodations for those folks and right now we are going to put them in the lobby here,” Mayor Madon also said of the evacuation in the Wallsend community. “We are sorry but there is no place in the hospital for animals, but the hospital is just not set up for that.”

The Transportation Cabinet announced just after 4 p.m. on Thursday that the gates were being reopened.

When Brock declared a State of Emergency for Bell County, it opened the county up for State and Federal resources and funding to assist with the flood response.

Middlesboro Mayor Rick Nelson closed City Hall and several businesses throughout Middlesboro had to be closed due to the flooding. Cumberland Avenue was closed between 19th Street and 15th Street due to being completely underwater.

There are several school closures throughout the community and emergency responders are telling the community to take caution when traveling and to turn around, don’t drown.

Middlesboro News will continue to be in communication with the county entities and emergency responders and the water event continues throughout Bell County.