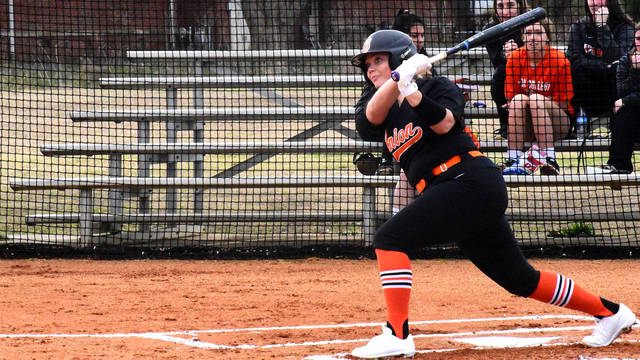 Union College softball had all three phases of the game working well on Monday as it opened the 2020 season with a doubleheader sweep of visiting Alice Lloyd College (Ky.), winning 8-0 and 2-0.

BARBOURVILLE — Union College softball had all three phases of the game working well on Monday as it opened the 2020 season with a doubleheader sweep of visiting Alice Lloyd College (Ky.), winning 8-0 and 2-0.

Union tied a program record with seven doubles in the first game, while the pitching staff struck out 16 batters and allowed only four hits in the two games. The Bulldog defense was stout as well, not committing an error in the two games and recording one double play.

The Bulldogs lined a program-record seven doubles in compiling 13 total hits and scored in all but one inning en route to the 8-0 victory.

Mackenzie McMahan lined an RBI double in the first to get the scoring started. Union was up 6-0 after four innings. The Bulldogs ended the game with two runs in the sixth to lock up the 8-0 victory.

McMahan lined two doubles, drove in two, and scored once in her Bulldog debut. Ashley Sain also went 2-for-4 with two RBIs.

Madison Williams earned the win, going five innings and allowing two hits and one walk with six strikeouts. Paige Oldham tossed a scoreless sixth and had one strikeout.

McMahan jumpstarted the Bulldog offense in the first as Union completed the sweep with the 2-0 decision. After singling with two out, McMahan scored when Sain doubled and an errant throw allowed the first baseman to come home.

In the third, Ariel Dailey led off with a triple and then scored on Marissa West’s sac bunt to make it 2-0.

Abby Wall took care of the rest. The sophomore transfer picked up the complete-game shutout by allowing only two hits and one walk to go along with nine strikeouts.

“I’m very happy with how the team overall performed today,” said head coach Alyssa Morris. “Our pitching staff and defense did phenomenally. Our offense performed when needed and adjusted well. Abby, Madison, and Paige did a great job taking charge on the mound. I’m very excited to see how we do against Georgetown this weekend.”

Union had 10 extra-base hits out of its 20 on the day. McMahan and Dailey each had two.

In the opener, the entire starting lineup had at least one hit.

This is the first time Union opened the season with a doubleheader sweep since 2016. The Bulldogs ended up starting that season 5-1.

Union hosts Georgetown College (Ky.) for a doubleheader on Saturday. First pitch is set for 1 p.m.