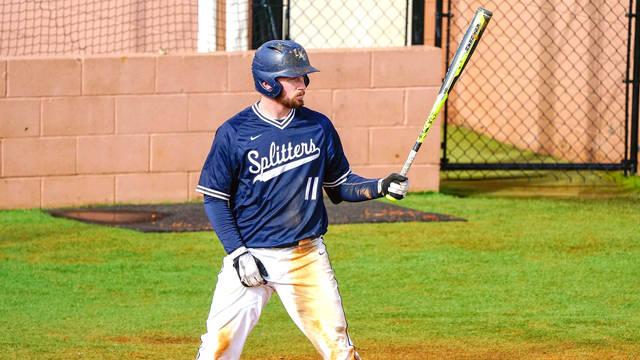 Third baseman Tyler Adams steps up to the plate. He finsihed Monday’s game with three runs and three RBIs while going 2-for-4 at the plate.

ORANGEBURG, S.C. — Senior East Tennessee State left-handed transfer Hooper Mills made his Lincoln Memorial University baseball debut on the mound and the Railsplitters’ offense erupted for 16 hits and 13 runs Monday afternoon at historic Mirmow Field in Orangeburg, South Carolina. Senior Tyler Adams and sophomore Scooter Ray each clobbered their first home runs of the season and LMU (1-3) earned a 13-10 non-conference win at Claflin University for its first victory of 2020.

The Railsplitters struck in the top of the opening inning, sending two to home plate on a two RBI single from Critzer before building their lead to seven in the second. Ten batters stepped to the plate in the second frame for LMU, resulting in the Railsplitters’ biggest inning of the day. Scoring five runs on five hits, Richey smacked a two RBI double and Adams crushed a three-run shot to give the LMU a 7-0 advantage.

A solo leadoff homer in the top of the third by Ray gave the visiting Railsplitters an 8-0 lead before the Panthers (2-2) could respond in the bottom of the inning. Claflin made it a three-run game in the second half of the third by scoring five runs.

An RBI single by Critzer in the top of the fourth pushed LMU’s lead out to 9-5 but the Panthers threatened once again in the bottom of the fourth. With sophomore right-hander Eli Wright taking over on the hill with one out in the inning and runners and first and second, the Railsplitters got out of a jam. Claflin loaded the bases before Wright delivered, forcing a flyout to center field and collecting a strikeout on a big cut.

The Panthers would not go away as they added a score in the bottom of the fifth on a solo home run, making it a 9-6 game. LMU would go back up by four at 10-6 in the top of the sixth with an RBI infield single from freshman Max Palmieri.

Once again, Claflin responded with a run of its own in the bottom of the inning. A bloop single to centerfield cutting the deficit to 10-7.

After the Railsplitters loaded the bases in the top of the seventh but couldn’t bring anyone home, the Panthers got within two in the bottom half of the inning with an unearned run.

Loading the bases once again in the eighth, LMU scored to create a three-run separation at 11-8 but left three base runners stranded. Junior Murray State Community College right-handed reliever Wesley Case entered in the bottom of the eighth and retired the side in order to send the game into the ninth with the Railsplitters holding a three-run lead.

Thanks to an RBI single to left field by Palmieri in the top of the ninth, LMU scored two runs on just one hit to go in front 13-8. Claflin would score twice in the bottom of the ninth but it was too little, too late as Case closed out the game to collect his first save as a Railsplitter.

Adams’ second-inning bomb was his 25th homer of his career, moving him into a tie for the fifth-most in program history. Ray’s third-inning home run was his second of his collegiate career.

The Railsplitters return to Harrogate this weekend for their home-opening three-game series against the Great Midwest Athletic Conference’s Ohio Valley University. First pitch of LMU’s home opener at Lamar Hennon Field is slated for 4 p.m. Friday, Feb. 7 with a Saturday afternoon doubleheader beginning at 1 p.m. on Feb. 8.