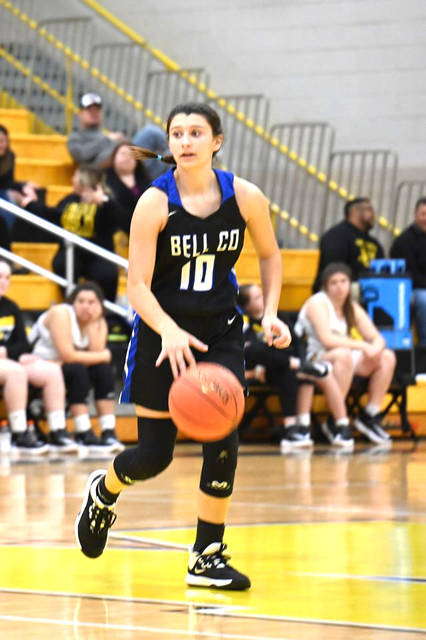 Ashtyn Meyers brings the ball up the court during a previous game. She scored 11 points against Harlan on Friday.

After four seasons away from the top spot in the 52nd District, the Bell County Lady Cats are back on top as they clinched the district’s top seed in blowout fashion Friday with a 65-29 win over visiting Harlan.

“That was one of our goals coming into the season, winning as many district games as we could and earning the top seed,” Bell County coach David Teague said.

Bell County wasted little time taking control, racing to a 23-4 lead after one quarter as Harlan turned the ball over seven times and hit only one of 11 shots from the field while Bell hit eight of 16.

King finished the game going 11-for-14 on the floor and 8-for-11 from the free-throw line.

The standout forward wasn’t alone as both Whitney Caldwell and Brittney Davis reached double figures on the night. Caldwell tallied 18 points while shooting nearly 60 percent from the floor. She went 3-for-4 from long range and grabbed four rebounds.

Davis tallied 10 points on the night while connecting on four field goals including two 3-pointers.

OBI was led by Katy Schroeder with 11 points. Emilie Field-Darragh ended the night with 10 points.

After suffering a disappointing loss to Middlesboro on Friday, Pineville rebounded on Saturday against Jackson City and claimed a 76-66 victory.

It was a full team effort as four Mountain Lions reached double digits in the scoring column. Senior Clay Goodin led the team with 21 points while shooting at a 75-percent clip. Dalton Mason ended the night with 19 points including three 3-pointers.

For Jackson City, it was the Slayden Sizemore and Alexander Terry show. Sizemore put up a game-high 26 points while shooting 75 percent from the field. He also went 7-for-9 from the charity stripe. Terry ended the game with 23 points.

The Yellow Jackets’ six-game winning streak came to an end on Saturday at the hands of Wayne County. Middlesboro couldn’t get much going outside of their starting five and fell 57-44 to the Cardinals.

Three-point shooting made a difference in the game with Middlesboro connecting on just one of their 14 attempts from beyond the arc. Wayne County was able to make seven 3-pointer on the evening.

Thomas Spencer paced the Cardinal offense scoring a game-high 31 points while going 13-for-17 from the field. He also grabbed six rebounds.

Bryson Tucker finished the game with 11 points, and Mason Burchett tallied nine points in the game for Wayne County.