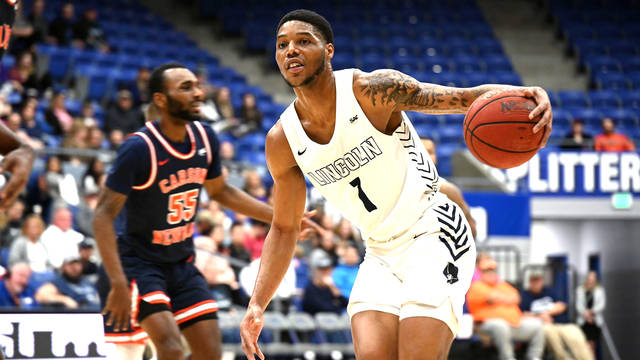 Courvoisier McCauley scored 26 points in 29 minutes of action against Queens on Saturday.

CHARLOTTE, N.C. — Another matchup with the current second-ranked team in the NCAA Division II Southeast Region, another victory. For the third time this season, the Lincoln Memorial University men’s basketball team came out victorious in a battle of Southeast Region and South Atlantic Conference leaders by cruising to a dominant, 103-80 win over receiving-votes Queens University of Charlotte Saturday in North Carolina.

Holding the host Royals (14-6, 9-5) to 42.5 percent (31-of-73) shooting and only 25.9 percent (7-for-27) from distance, LMU now owns seven wins over teams who were either ranked or receiving votes in at least one of the two national polls when the game was played. Queens entered Saturday ranked 17th in the latest D2SIDA Media Poll and receiving six votes in the most current National Association of Basketball Coaches (NABC) Top 25.

“I’m proud of our guys, they (Queens) are a hard team to play against,” head coach Josh Schertz commented after the win. “They’re extremely athletic and physical, and they were into us all game long. I thought our guys did a good job of owning their space and being determined to attack the rim. We shared it well and guarded well for the most part in transition and in the half-court.”

“We gave up too many second-chance points (20) and turned it over a bunch, which compromised our defense,” coach Schertz added. “But overall, that’s a really good win against a very good basketball team.”

The 23-point victory to complete the regular season series sweep of the Royals is the Railsplitters’ 15th 20-point win of the season.

With both teams committing 17 turnovers for a combined 34, LMU scored 22 points off Queens’ miscues and racked up 25 points on the fastbreak while getting 31 points in bench production.

Leading for 38:19 of the contest, the Railsplitters took their first lead of the day on a fastbreak bucket by senior point guard Anthony Brown at 4-2 just a little over a minute-and-a-half in. For the first three-and-a-half minutes of play, LMU was unable to create much separation before a 9-2 run pushed the Railsplitters’ lead out to 19-11 on another Anthony Brown basket.

Redshirt junior guard Devin Whitfield scored in the paint a little after seven minutes of action to give LMU its first 10-point lead of the game at 22-12. After the hosts trimmed down the deficit to six, seven consecutive Railsplitter points put LMU up by 13 with a flurry of points in only a 19-second span. With Anthony Brown’s jumper giving the Railsplitters a 29-16 lead at the 11-minute mark of the half, the Royals made a ferocious comeback to get within two. LMU was outscored 16-5 across five minutes of play as the margin was cut to 34-32 with just under six minutes to go before the break.

A rare five-point possession sparked an 8-0 Railsplitter run in under a minute of game clock. Whitfield connected on a trey as redshirt senior guard/forward Kamaran Calhoun was fouled while screening on the play. Calhoun knocked down both free throws before Whitfield hit another three pointer on LMU’s ensuing trip down the court.

Starting the second half red hot, LMU raced out to a 23-point lead at 63-40 after only a little over three minutes of action. A 10-0 run in which sophomore guard Courvoisier McCauley accounted for eight points drove the Railsplitters’ strong second-half start as LMU pushed out in front by 26 at 70-44 on a pair of free throws from redshirt sophomore guard Cameron Henry. Through just five minutes of second-half play, the Railsplitters had already outscored the Royals 19-11.

From the 17:21 mark of the second half on, LMU’s lead never dipped below 20. Calhoun rose up for a dunk just under 13 minutes to go to extend the Railsplitters’ advantage to 27 at 76-49 and LMU led by as much as 30 down the stretch. Able to insert their reserves with a few minutes remaining, the Railsplitters went ahead 101-71 with a basket from freshman guard Jeremiah Keene. With the game already decided, LMU was outscored 9-2 in the final two-and-a-half minutes.

McCauley led LMU with 26 points on 8-for-13 shooting, hitting five three pointers and collecting six rebounds while Henry notched his fourth double-double in the last seven games with 12 points and a game-high 12 boards. Sophomore guard Julius Brown and Whitfield each scored 14 and Anthony Brown recorded 16 points and dished out a game-high four assists. In 20 minutes off the bench, Calhoun registered eight points and earned three blocks.

The Railsplitters travel to Hickory, North Carolina, Wednesday for a 7:30 p.m. tilt at Lenoir-Rhyne before returning to the comforts of Tex Turner Arena next Saturday, Feb. 8 for a matchup with Wingate.