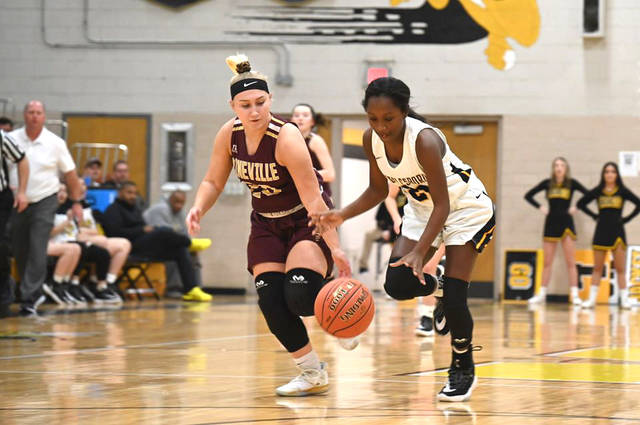 Pineville’s Brittney Davis goes for the steal against Keevi Betts during Friday’s game.

Strong performances by Whitney Caldwell and Raigan King propelled Pineville past rival Middlesboro on Friday. The duo combined for 39 points in the Lady Lions’ 58-48 victory over the Lady Jackets.

Caldwell led the way with 24 points. She went 7-for-8 from the free-throw line and came up one rebound short of a double-double with nine. King scored 15 points while shooting the ball at a 44.4 percent clip. She also hit seven free throws and hauled in nine rebounds.

Summer Partin added seven points to the scoreboard for the Lady Lions.

For Middlesboro, it was eighth-grader Emrey Glover leading the way with 17 points. Grace Gent finished the game with 11 points, and Kirsten Keith tallied 10 points on the night.

Pineville came out of the gate strong taking a 20-8 lead in the first quarter with the help of Caldwell’s nine points. The Lady Jackets responded with 17 points in the second quarter to cut the halftime deficit to 31-25. Keith paced Middlesboro in the second period with seven points.

The Lady Jackets kept the deficit at single digits in the third only being outscored by two points in the period. Caldwell’s seven points in the frame helped the Lady Lions take a 45-37 lead into the final quarter.

Pineville edged Middlesboro in the fourth quarter, 13-11, to secure the 10-point victory.

Jackets hold off Pineville at home, 63-52