No. 2 LMU remains perfect in SAC with 87-65 victory over rival Carson-Newman 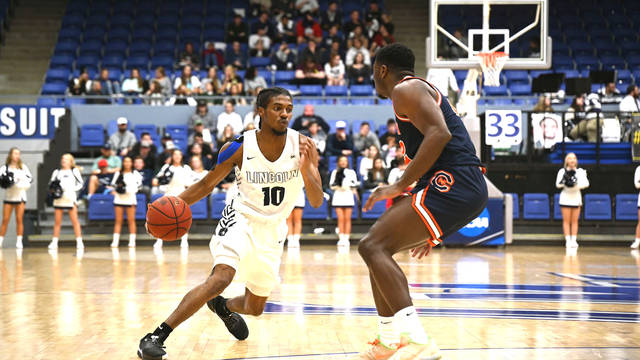 Anthony Brown finished Wednesday’s victory over Carson-Newman with 23 points in 36 minutes of action.

LMU (20-1, 13-0) extended the nation’s longest winning streak by holding the visiting Eagles (7-12, 4-9) to 38.5 percent (25-of-65) shooting and outrebounding one of the best rebounding teams in the nation, 40-37. With four double-figure scorers, the Railsplitters notched their 14th 20-point triumph of the season to remain unblemished in conference play, at home and in 2020.

One of only four NCAA Division II basketball programs to have posted 20 wins or more for 10 consecutive years – West Liberty (15), Bellarmine (11) and Indiana (Pa.) (11) – LMU secured its 11th-straight 20-win season with the victory.

Leading from the 11:22 mark of the first half on, the Railsplitters got another near triple-double performance from redshirt sophomore guard Cameron Henry and a career-high 23 points from senior point guard Anthony Brown. Henry recorded his fifth double-double of the season and sixth of his career with 14 points and 10 rebounds as he also dished out seven assists, made a game-high four steals and had a block. Meanwhile, Anthony Brown went an impressive 4-for-5 from three-point land, knocked down all five of his free throws, handed out a game-high tying seven dimes and collected six boards with a pair of blocks and a steal.

After a layup by the Eagles’ Dimitrii Bykov put the visitors ahead by four at 9-5 after just over five minutes of action, LMU went on a 17-5 run over the next six minutes of play to take a 22-14 lead on a basket from sophomore guard Courvoisier McCauley. Getting an emphatic one-handed slam from Anthony Brown, six-straight points from McCauley and a five-point spark off the bench from sophomore guard Julius Brown during the run, the Railsplitters extended their lead to 10 at 26-16 on a layup by redshirt senior guard/forward Kamaran Calhoun with six-and-a-half minutes to go before the break.

Anthony Brown knocked down two three pointers in the first three minutes of the second half as the Railsplitters built a 16-point lead. Five quick points by the Eagles got the visiting team back within 11 after just over four minutes of second-half action but that would be as close as Carson-Newman would be for the remainder of the night.

LMU went on a game-securing 13-4 run over a five-and-a-half minute span to push its lead out to 20 at 62-42 with 11-and-a-half minutes to go. Anthony Brown drained his fourth trey of the game near the halfway mark of the second half to maintain the Railsplitters’ 20-point advantage before the Eagles chipped it down to 15 with 6:44 remaining on a jumper by forward EJ Bush.

Carson-Newman would get within 14 at 71-57 on a Bush three pointer with 4:47 to go but LMU responded with a Henry three and a layup from redshirt junior guard Devin Whitfield. A seven-point spurt with a pair of free throws by Julius Brown, an Anthony Brown layup and an old-fashioned three-point play from Whitfield gave the Railsplitters their largest lead of the night at 83-59 with only 1:46 left.

Calhoun would get another layup before all was said and done and Anthony Brown knocked down a pair of free throws in the final seconds. LMU finished the game 8-for-17 (47.1%) from distance and both teams got 21 points from their respective benches with the Railsplitters holing a 44-40 advantage in points in the paint.

McCauley scored 15 and had five rebounds, while Calhoun provided a huge lift off the bench with 14 points, seven boards and a pair of assists. Redshirt senior forward Rhondi Hackett, who leads the SAC in field goal percentage, scored nine points on 4-for-4 shooting in only 11 minutes of action.

Bush led the Eagles with a team-best 18 points on 7-for-11 shooting and seven rebounds as starting guard Tripp Davis provided 15 points and guard Luke Brenegan had a team-high four assists to go along with six boards. Kaleb Wallace registered 13 points, five rebounds and two assists in 12-and-a-half minutes off the bench for Carson-Newman.

The Railsplitters hit the road for a pair of games beginning with receiving-votes Queens this weekend in Charlotte, North Carolina. Tip-off from inside the Levine Center is slated for 4 p.m. Saturday. Next Wednesday, Feb. 5, LMU travels to Hickory, North Carolina, for a showdown with Lenoir-Rhyne.