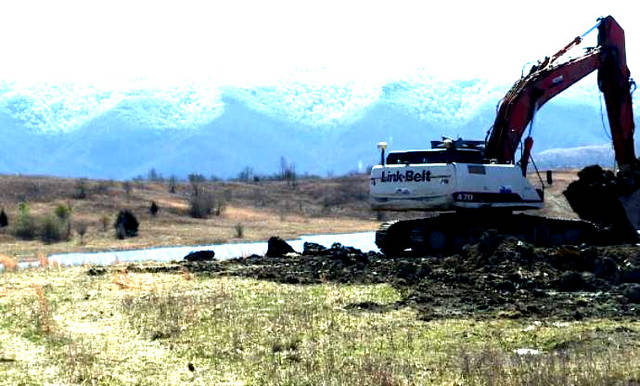 Construction on Boone’s Ridge is expected to pick back up in March although the opening date for the upcoming tourist attraction which is formerly known as the Appalachian Wildlife Center, is now set for May 2022 instead of the expected date of May 2021.

Boone’s Ridge, formerly known as the Appalachian Wildlife Center, is now looking at an opening date of May 2022 instead of the expected date of May 2021.

Bell County Judge-Executive Albey Brock made the announcement at the Sixth Annual Pineville Gala during a question and answer session with the audience.

“I just found out on Friday that the opening date has been pushed to May 2022,” Brock explained. “Any project that is a $40 to $50 million and is fundamentally community changing is going to have hiccups in it. There are going to be some things that slow it down and we’ve had that happen.”

Although there is a delay in the opening, Brock wants to assure the community that the delay does not mean that the project is in any sort of jeopardy.

“I want you to have confidence that this thing is going to happen. It’s coming, and we as a community need to be getting ready for it,” Brock said. “It’s coming, it’s still very much alive, don’t think that it’s dead. I know there have been naysayers on this project since it started, but Boone’s Ridge is going to exist.”

Pineville Mayor Scott Madon interjected that the city of Pineville approved a $1.6 million project that will run water to the site. The project also includes a storage tank and also a loop line that will help in the county if there are any line breaks.

Madon stated that the last number he heard projected to attend Boone’s Ridge was 960,000 visitors by the fifth year of being open.

“I don’t know what we are going to do with 960,000 people a year coming to Pineville,” Madon exclaimed.

When the project first began it was known throughout the community as the Appalachian Wildlife Center, but through the course of the construction it has undertaken a name change and is now being referred to as Boone’s Ridge.

Brock continued to explain that the funding for the project includes $12.5 million in Abandoned Mine Lands money along with an $18 million USDA loan. The delay started when a different environmental study was needed by the USDA than what had been submitted for the AML funds.

The Appalachian Wildlife Foundation has raised $44.4 million for the wildlife center. The parking lot and all of the underground drainage is installed at the site and it is awaiting conduit to be laid before the footers for the building can be poured.

“They actually got ahead of schedule in the spring and early summer but then they had to stop the construction,” Brock explained. “They closed on the construction loan in December but because it’s wintertime, it’s not the best time to fire back up. They’re going to start in March and lay eight miles of conduit and then they’ll start pouring concrete.”

Brock said that the community will be updated throughout the course of the construction in the upcoming months.