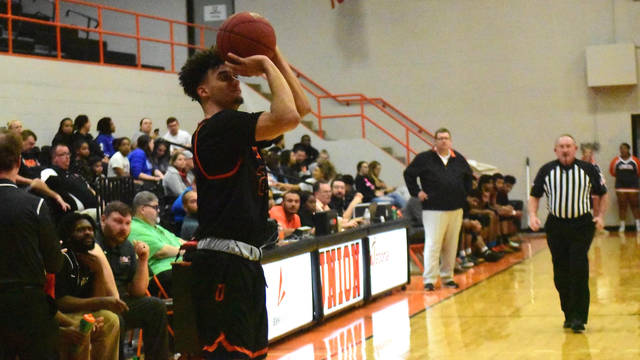 Blake Ervin pulls up for a jumper during Union’s 96-84 loss to Allen University. He finished the night with 19 points.

COLUMBIA, S.C. — A rough second half did in No. 19 Union College men’s basketball as it dropped a 96-84 decision to host Allen University (S.C.) in Appalachian Athletic Conference (AAC) play on Saturday.

Union appeared to be in control at the break, leading 52-40 at the half. However, the Bulldog offense went cold during the final 20 minutes while the Yellow Jackets heated up.

From the point on, Union was not able to get the deficit back to single-digits as Allen collected the 96-84 victory.

STAT OF THE GAME

Blake Ervin led Union in scoring with 19 points, going 6-of-8 from the field and 4-for-4 from 3-point range.

Four Bulldogs scored in double figures. Joining Ervin was Wharton with 14 points, while Richard Brown and Kelvin Jackson each had 11.

Austin Cummins matched his season-high for assists with six. He also accomplished the feat on Nov. 13 at Kentucky Christian University.

All three of Union’s conference losses have come on the road.