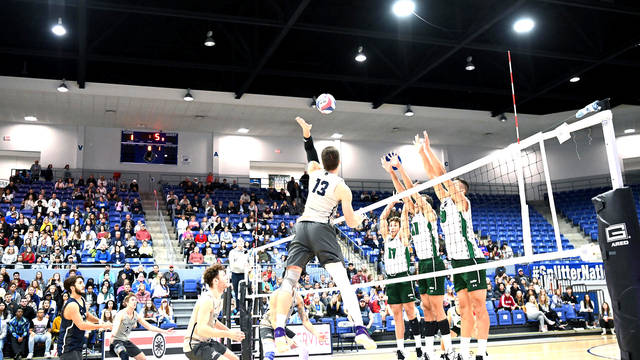 Evan Cory goes for the kill during LMU’s game against Hawai’i on Monday. He finished the night with 16 kills, one ace and one block.

HARROGATE, Tenn. — History was made Monday night inside Tex Turner Arena as the first-ever volleyball match was played in the building’s nearly 29 years of existence with the Lincoln Memorial University men’s volleyball team hosting top-ranked University of University of Hawai’i at Mānoa. Showcasing one of the elite programs in NCAA Division I-II volleyball, the Railsplitters and Rainbow Warriors competed among a boisterous crowd of over 2,000 in a one-hour, 16-minute affair in Harrogate.

Despite dropping all three sets, LMU (3-3) showed fight until the end and nearly won a tightly-contested 25-23 third set. Visiting Hawai’i (8-0) got off to a hot start and took both the first and second sets by identical scores of 25-15 before the Railsplitters settled in the third.

Behind a remarkable .603 attacking mark and 43 kills, the Warriors had excellent ball control throughout the three sets and made only five attack errors. Hawai’i notched at least 14 kills in each set and hit a blistering .778 in the second stanza after attacking at .667 in the opening set.

After collecting just 19 kills across the first two sets, LMU turned in a .435 attack in the third and rose up for 14 kills to finish the night with a .261 attacking percentage and 33 total kills. The Railsplitters were able to get only one point directly off their serve as the Warriors claimed seven service aces and held a 9-3 advantage on the block.

Four of the first five points of the match went to Hawai’i before a trio of LMU points evened up the first set at 5-5. The Warriors then built a 9-5 lead with four consecutive points and steadily stretched their lead to 16-10, forcing head coach John Cash to call a timeout. The Railsplitters would find themselves trailing 22-13 after a 5-1 Hawai’i run, and a pair of Warrior errors would prove to be the only other points LMU would win in the set.

Although jumping out to a 2-1 lead in the second set behind two kills from senior opposite Evan Cory, the Railsplitters were unable to cool down Hawai’i’s attack and trailed 12-7 after an 11-5 Warrior run. A kill from Cory on an assist from sophomore setter Ryan Foy got LMU within four at 12-8 but that would be as close as the Railsplitters would get for the remainder of the set. Hawai’i broke out to a 22-12 lead and pulled ahead 24-13 following a Railsplitter timeout. A Warrior serving error and a kill by sophomore outside hitter Johansen Negron gave LMU its final two points of the set as Hawai’i’s 28th kill of the night gave the visitors a 2-0 lead in the match.

The Railsplitters won three of the first four points of the third set and were tied with the Rainbow Warriors at 8-8 thanks to a Hawai’i ball handling error and a kill from junior outside hitter Logan Kerley on a pass by junior setter AJ Risavy. The two teams remained within two points of each other as Cory kills and a block by Risavy and freshman middle hitter Matthew Gentry tied the score up once again at 14 and 16-all. Risavy made another kill to make it 17-17 before the Warriors pulled in front 19-17 with a kill and an ace. Trailing 20-18, LMU put together back-to-back points with a Cory kill on a Risavy assist and a block from Cory and sophomore middle/right side hitter Dawson Walker. Hawai’i won the next three points but the Railsplitters would respond and make it a one-point set at 23-22 on a Negron kill. A Warrior kill gave the visiting team their first match point of the night at 24-22, but Cory staved it off with a kill on a Risavy pass. Hawai’i then clinched the match with one final kill past the LMU block.

Cory led the way for the Railsplitters, laying down a match-high 16 kills and making a match-best five digs with an ace. Negron recorded six kills and Walker four, to go along with a pair of blocks, while Foy assisted on 18 kills and Risavy 10.

Warrior seniors Colton Cowell and Rado Parapunov each tallied 10 kills for Hawai’i as Cowell earned a team-high three digs and senior middle blocker Patrick Gasman posted a match-high seven blocks. Freshman outside hitter Chaz Galloway made six kills and had an ace for the Warriors and freshman setter Brett Sheward assisted on 25 of Hawai’i’s 43 kills.

Hawai’i was just the second top-ranked NCAA team in any sport to visit Harrogate and was the first Division I No. 1 team LMU has hosted.

The Railsplitters continue their three-match homestand this weekend by welcoming Saint Francis University to Mary Mars Gym Saturday for a 2 p.m. first serve. Next Friday, Jan. 31, LMU will host Belmont Abbey in a 7 p.m. affair.