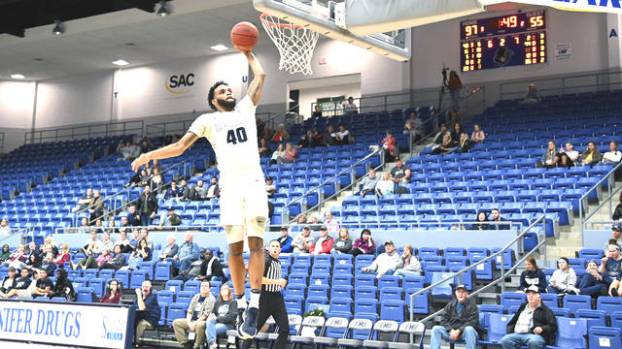 Rhondi Hackett soars through the air during a previous game. He finished Saturday’s game against Anderson with 20 points in 31 minutes of play.

ANDERSON, S.C. — Holding its adversary to 34.9 percent shooting, the Lincoln Memorial University men’s basketball team claimed its 17th consecutive victory Saturday with a 90-68 road rout of Anderson University inside the Abney Athletic Center in South Carolina. The third-ranked Railsplitters (17-1, 10-0) picked up their 12th 20-point win of the season and extended the nation’s longest winning streak with 11 three pointers and 52 second-half points.

LMU’s 14th-straight triumph over the host Trojans (9-7, 4-6), the Railsplitters scored 27 points off of 14 offensive boards and owned a plus-12 margin on the glass (46-34). With three double-figure scorers, LMU outscored Anderson 42-12 in the paint and got 29 points from its bench.

After trailing by three in the opening two minutes, the Railsplitters took control of the game midway through the first half with an impressive 17-3 run over an eight-minute span. Weathering a 9-0 Trojan run to close out the first half, LMU scored the first nine points of the second half and never looked back.

“I’m really proud of our guys and how they competed for 40 minutes in a difficult environment,” spoke Head Coach Josh Schertz following the win. “I thought we were terrific the first 17 minutes and then Anderson went on a 9-0 run to finish the half to cut the lead to nine. From there, I thought we did a great job of responding to their runs and keeping separation.”

“The job that Devin (Whitfield), Anthony (Brown), Julius (Brown) and Cameron (Henry) did defensively on (Quin) Nottingham and (Shawn) Benard was the biggest key today,” commented coach Schertz. “Those two guys are the highest scoring backcourt in the league, and we held them to one combined field goal the last 36 minutes.”

A pair of Anderson treys kept the home team ahead by three through nearly two minutes of play before a put-back layin by senior point guard Anthony Brown gave the Railsplitters their first lead of the day at 6-5. A basket by the Trojans’ Quin Nottingham gave the advantage back to Anderson but it would be the final time LMU trailed in the contest.

An 8-2 Railsplitter run capped by a three pointer from sophomore guard Courvoisier McCauley built a 15-10 lead for the visitors at the first media timeout before the two teams remained scoreless for a two-and-a-half minute stretch. Leading 18-15 through nine minutes of action, LMU began its most extensive run of the day. Sparked by a jumper from redshirt junior guard Devin Whitfield, the Railsplitters raced out to a 17-point lead at 35-18 after outscoring the hosts 17-3 over eight minutes of play.

However, behind a boisterous crowd the gritty Trojans closed out the first half on a 11-3 run and scored the final nine points before the break to get within nine at 38-29.

Starting the second half on a 9-0 run, a three pointer by redshirt senior forward Rhondi Hackett put the Railsplitters ahead 47-29 after two-and-a-half minutes of action. A trey from Whitfield and then a Hackett layup gave LMU its first 20-point advantage of the day six minutes into the second half. The Railsplitters would continue to hover around a 20-point lead before a 10-3 Trojan run got Anderson within 15 at 66-51 with 10 minutes to go. A three pointer from sophomore guard Julius Brown halted the home team’s momentum and LMU would extend its lead back out to 20 on a Whitfield layup.

Up by 19 at 76-57 with under five minutes remaining, the Railsplitters outscored the Trojans 9-2 over the next three minutes of play and took their largest lead of the day at 85-59 following an old fashioned three-point play from redshirt sophomore guard Cameron Henry. Freshman guard Jeremiah Keene hit a layup and junior guard Alex Dahling knocked down his third three to score LMU’s final five points.

Whitfield posted his first double-double as a Railsplitter with a team-high 24 points and game-high 11 rebounds, going 8-for-9 at the foul line in the process. Hackett had his finest game as a Railsplitter, making eight of his 13 field goal attempts and going 2-for-2 from three-point land for a career-high 20 points. Anthony Brown finished with 12 points and seven boards, while Henry scored nine and grabbed 10 rebounds. Dahling and McCauley each totaled nine points.

Crosby James led the Trojans with 24 points on 9-for-15 shooting off the bench as Alex Keel notched 13 points and claimed nine rebounds and Nottingham scored 11.

The Railsplitters remain on the road for one more game before returning to the comforts of Tex Turner Arena. LMU travels to nearby Greeneville, Tennessee, Wednesday for a 7:30 p.m. midweek tip-off inside Pioneer Arena prior to hosting Coker at 4 p.m. next Saturday, Jan. 25.