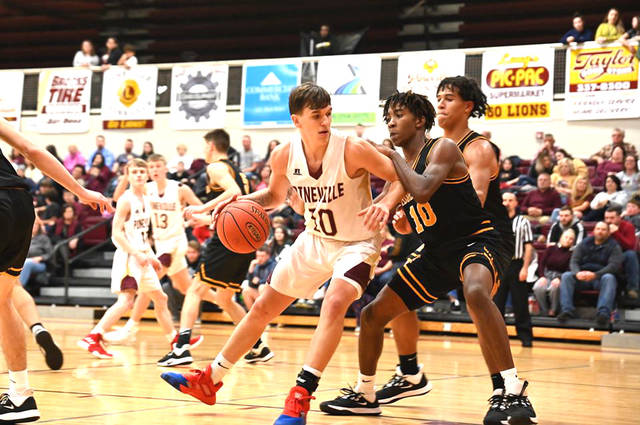 Clay Goodin backs down Middlesboro’s Jabari Kyle during a previous game. He finished Saturday’s game against Thomas Walker, Va. with 34 points while shooting 62.5 percent from the field.

For the second time this season, Pineville got the best of Thomas Walker. During a trip to the Virginia school on Saturday, the Lions were able to pull off the 84-73 victory over the Pioneers.

It was senior Clay Goodin and junior Sean Phipps that took control of the game for Pineville. Goodin finished with 34 points while shooting 62.5 percent from the field. He also went 4-for-8 from beyond the arc and went 10-for-15 from the free-throw line.

Phipps played an outstanding game as well registering another double-double on the year. He ended the game with 27 points with 13 coming from the charity stripe. He capped off his efforts with a game-high 22 rebounds.

Keean Fuson was the only other Mountain Lion to reach double figures. He finished with 11 points while going a perfect 3-for-3 from the field. He ended the night 7-for-11 from the free-throw line.