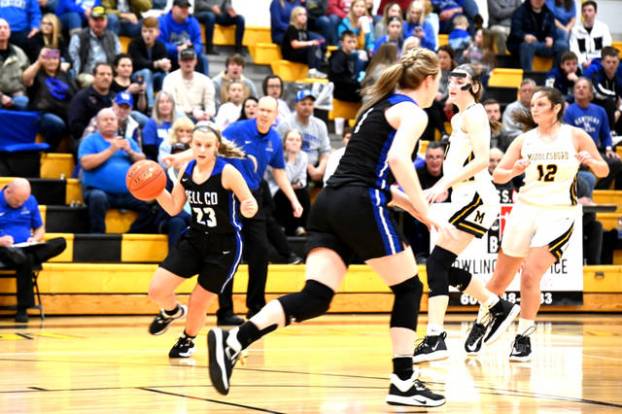 Mataya Ausmus gets possession of the ball during a previous game against Middlesboro. The Lady Cats claimed back-to-back 2A sectional titles on Saturday with a victory over McCreary Central.

The Bell County girls basketball team made winning the Section 7, 2A Classic look easy over the weekend. The Lady Cats easily dispatched Knox Central in the first round 65-45 and handled McCreary Central 63-42 in the championship. This is the second time in as many years that Bell County has won the Section 7 title.

“I’m very proud of our team. They had set winning the 2A sectional and advancing back to Owensboro as one of their goals for this season. I’m very proud of them for accomplishing that,” said Bell County head coach David Teague. “The kids worked hard and were focused last week. They really did their best at following our game plans.

“It’s a big honor for our team to get to go back to Owensboro and play in the 2A State Tournament. There will be some really good teams out there, and it will be a great experience for our kids moving forward with the rest of the season.”

With the back-to-back victories, the Lady Cats extend their current winning streak to 10 games with their last defeat coming against Johnson Central on Dec. 14.

Ashtyn Meyers led the effort with 15 points while shooting 50 percent from the field. She also went 5-for-9 from beyond the arc.

Abby Harris tallied 13 points on the night, while Abigail Cornett finished with 11 points. Talyah McQueen capped off her double-double with 10 points and 14 rebounds.

The combined efforts of Talyah McQueen and Nadine Johnson helped the Lady Cats win the 2A sectional on Saturday over McCreary Central.

McQueen notched her second double-double of the tournament scoring a game-high 18 points and hauling in 13 rebounds.

Johnson ended the night with 12 points and was the only other Lady Cat to reach double figures. Abigail Cornett and Abby Harris finished with nine points apiece.

Williamsburg defeats Jackson for All ‘A’ title

PINEVILLE — Favored to win a second straight 13th Region All “A” Classic title in 2019, the Williamsburg Lady Jackets... read more