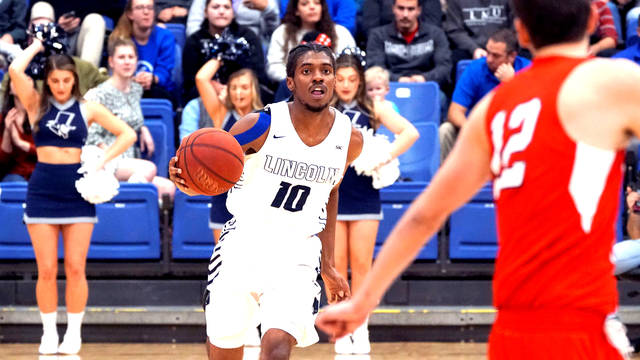 Anthony Brown brings the ball up the court during LMU’s game against UVA-Wise. He finished the night with 12 points in 37 minutes of action.

HARROGATE, Tenn. — Despite uncharacteristic cool shooting and 13 first-half turnovers, the third-ranked Lincoln Memorial University men’s basketball team found a way to pull out a 76-64 win over UVA Wise Wednesday night inside Tex Turner Arena. The Railsplitters’ 14th consecutive victory gave lead man Josh Schertz his 300th career win as a head coach, doing so in only 365 games across 12 years at the helm of LMU basketball.

The game was the first-ever South Atlantic Conference meeting between the two programs as UVA Wise became full-fledged conference members over the summer.

Scoring 27 fastbreak points, the Railsplitters overcame a five-point deficit in the second half and closed the game on a 30-13 run over the final 11 and a half minutes of play.

Entering the night as one of only two teams in all of NCAA basketball to be shooting over 80 percent at the free-throw line, 50 percent from the field and 40 percent from deep, LMU could not find the bottom of the net in the first half. The Railsplitters were an astonishing 1-for-14 from outside and found themselves trailing 8-4 after two minutes of action thanks to a trey from Cavalier guard Briggs Parris.

A fastbreak jumper from redshirt sophomore guard Cameron Henry gave the home team its first lead of the night at 13-11 following LMU’s lone three of the half from sophomore guard Courvoisier McCauley. However, a three pointer by Drew Greene gave UVA Wise a 17-15 advantage just under the 12-minute mark of the half. From there, the Railsplitters would go on an 8-0 run over the next three and a half minutes to build a 23-17 lead.

LMU led for the remainder of the half but was unable to create more than two possessions of separation. Both teams scored in the final seconds of the half with a fastbreak jumper from freshman guard Jeremiah Keene being matched by a buzzer-beating driving layup from Cavalier senior Chance Sheffey.

Limiting UVA Wise to just eight first-half field goals and 30.8 percent shooting, four of the Cavaliers’ made baskets were from beyond the arc. The Railsplitters’ defense claimed seven steals in the opening 20 minutes as UVA Wise equaled LMU’s 13 turnovers.

Holding the Cavaliers scoreless for the first two minutes of the second half, the Railsplitters went in front by eight (37-29) on a back-to-back layups by senior guard Anthony Brown. UVA Wise would not go away quietly though, going on a furious 11-2 run to retake the lead at 40-39 on a three pointer from redshirt senior forward Yesid Mosquera-Perea. After neutralizing back-to-back treys by sophomore guard Julius Brown and McCauley gave LMU a 46-43 advantage with 13:16 to go, the Cavaliers went on an 8-0 run over the next two minutes of play to take their largest lead of the night. UVA Wise guard Cameron Whiteside hit a three pointer to put the visitors up 51-46 at the 11:29 mark.

Playing with much more determination down the stretch, the Railsplitters outscored the Cavs 12-5 over the next 4:30 of on-court action to go back in front by two. A traditional three-point play by redshirt junior guard Devin Whitfield made it 58-56 with seven minutes remaining. LMU then went on a game-controlling 11-1 run over the next three minutes, pulling ahead by 12 with four minutes to go following three-straight made free throws due to a UVA Wise technical foul.

After the Cavs got a layup to make it 69-61 with 2:43 on the clock, the Railsplitters held UVA Wise to without a field goal for the next two minutes. Baskets from Anthony Brown and Julius Brown, in addition to another McCauley three, gave LMU its largest lead of the contest at 15 (76-61) with just under 30 seconds left.

The Railsplitters committed only four second-half turnovers and made five steals as McCauley, Whitfield and Anthony Brown each scored double figures in the half.

McCauley led the way with 23 points on the night and claimed a game-high 11 rebounds for his fourth career double-double and second of the season. Whitfield scored 16 with six rebounds, while Anthony Brown finished with 12 points and Henry 11 points, eight boards and four assists.

The Cavs were led by Whiteside’s 20 points and nine rebounds with Sheffey scoring 12 and starting guard Kaeleb Carter 11.