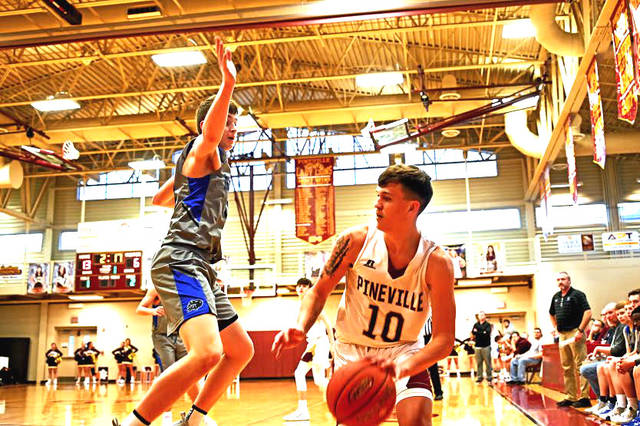 Clay Goodin dribbles past an airborne defender during Pineville’s victory over J. Frank White Academy. He finished the game with 10 points.

A five-game losing streak that stretch back to Dec. 17 ended on Wednesday when Pineville took down J. Frank White Academy 85-73.

It was a complete game effort for the Mountain Lions as they controlled the pace throughout most of the game, only being outscored in the fourth quarter.

Sean Phipps continued his impressive debut season with Pineville finishing with a game-high 33 points. Keeann Fuson tallied 17 points for the Lions, and Clay Goodin ended the night with 10 points.

For J. Frank White, it was Jake Gross leading the charge with 25 points. Jake Yeary ended the night with 20 points, and Blake Stoner scored 12 to round out the double-digit efforts.

Pineville started fast out of the gate ending the first quarter with a 22-11 lead with the help of eight points from Phipps and six from Goodin. Phipps and Fuson helped the Lions take a 44-30 lead into halftime.

The Knights battled Pineville to a standstill in the third quarter with both teams scoring 23 points apiece. After scoring only one point in the first half, it was Yeary who brought a spark to the Knights scoring 17 points in the third.

Phipps paced the Lions in the third with his 12 points. Despite being outscored in the fourth quarter, Pineville secured the 12-point victory.

* Stats based on scorebooks

Lady Dragons hold off Middlesboro in All ‘A’ regional