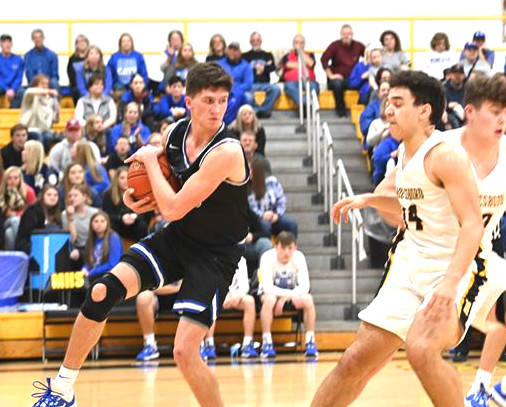 Cameron Burnett hauls in a rebound against Middlesboro earlier in the season. The sophomore forward tallied a game-high 20 points and nine rebounds against Williamsburg on Tuesday.

Former Bell County assistant Nick Napier brought his Williamsburg Yellow Jackets to town on Tuesday hoping to end a two-game losing streak. That was not the case as the Jackets fell to the Bobcats 68-58.

Four Bell County players reached double digits in the game with sophomore Cameron Burnett leading the way with a game-high 20 points. He finished the night shooting 80 percent from the field while hauling in nine rebounds.

Andrew Caldwell wasn’t far behind finishing with 18 points while shooting 75 percent from the field and 50 percent from beyond the arc. He also hauled in six rebounds.

Dawson Woolum finished with 16 points, and London Stephney ended the night with 12 points.

Gavon Thomas paced the offensive effort for Williamsburg, scoring 19 points on 66.7 percent shooting. He was a perfect 5-for-5 from three-point range.

Bell County (6-7) is slated to play Knox Central (12-2) on Friday in the 2A championship sectional tournament.

Williamsburg (6-9) will play Oneida Baptist Institute (6-6) in the 13th Regional All A Classic on Friday.