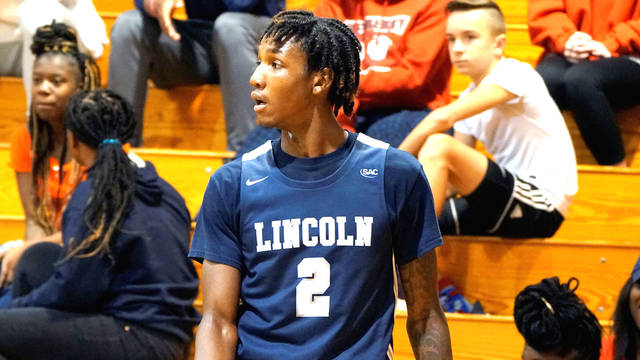 Allowing the hosts to score only two points in the opening five minutes of the contest, the Railsplitters capped a 16-0 run with a 3-pointer from junior guard Alex Dahling to pull ahead 16-2 just over five minutes in. After Newberry went on a 6-0 run in the following minute of play, the Railsplitters outscored the Wolves 11-3 in just over four minutes to go back up by 16 at 27-11 with 9:41 to go in the half.

Back-to-back Whitfield treys put the Railsplitters in front by 24 at 53-29 90 seconds into the second half. From there, Newberry would go on a 11-3 run over the next 3:45 of on-court action to chisel LMU’s lead down to 16 at 56-40 after five minutes of second-half play. However, sophomore guard Courvoisier McCauley connected on a three pointer to put the Railsplitters back up by 21 at 66-45 with 11:15 to play.

A pair of free throws by Whitfield capped a 14-3 LMU run over a 6:11 span and gave the Blue and Gray a 27-point, 80-53 lead with just four minutes to go. The Railsplitters took their largest lead of the day at 85-57 on a layup from redshirt junior forward Shaquille Rombley with 1:27 remaining. Freshman guard Jeremiah Keene scored LMU’s final points of the game on a jumper in the paint with just over 35 second left.

Whitfield was 11-for-18 from the field and 5-for-10 from deep in his best performance as a Railsplitter, adding four rebounds and a pair of assists. Dahling finished with four three pointers and 16 points, in addition to six rebounds, while redshirt sophomore guard Cameron Henry pulled down a team-high eight rebounds and dished out a career-best eight assists. McCauley scored 12 and grabbed six rebounds as sophomore guard Julius Brown collected eight points, tied his career high in rebounds with five and handed out five assists.

The Wolves got a team-high 11 points from QuanDaveon McCollum and 10 points from Marshall Lange. Luke Gibson scored nine and Newberry’s leading scorer and rebounder Angelo Sales, Jr. was held to just eight points and a trio of rebounds.

The Railsplitters return to the comforts of Harrogate where they will enjoy a three-game homestand beginning with UVa-Wise this upcoming Wednesday, Jan. 8. Tip-off from inside Tex Turner Arena is scheduled for 7:30 p.m. with the game sponsored by Powell Valley National Bank. Next weekend, LMU will host Catawba Saturday, Jan. 11 before welcoming Mars Hill Wednesday, Jan. 15.