Pineville advances to second round of 13th Region All A 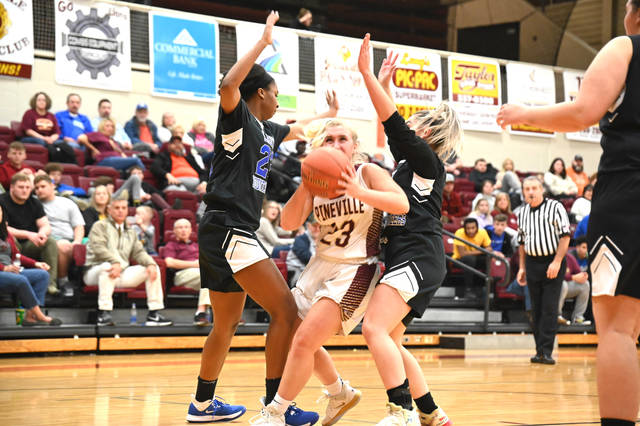 Brittney Davis fights through contact on her way to a layup during Pineville’s victory over OBI on Monday.

Pineville made quick work of Oneida Baptist Institute on Monday in the opening round of the 13th Region All A tournament. With the Lady Lion defense holding the Lady Mountaineers to just three points in the first half, Pineville eased their way to a 57-19 victory.

Emilie Field led OBI with nine points. Katy Schroeder ended the night with seven points and Samira Dennis scored three to round out the scoring.

Pineville exploded out of the gate taking a 20-0 lead after the first quarter. The second was much of the same with the Lady Lions racking up 19 points in the period with the help of six from Ava Arnett. Pineville took a 39-3 lead into halftime.

OBI managed to get 16 points on the board in the second half to cut the final deficit to 38 points.