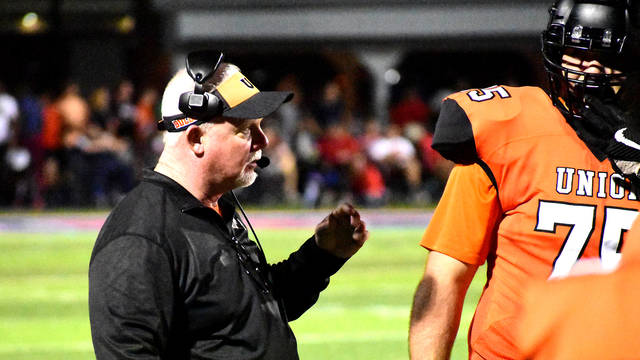 Linn stepped down after three-plus seasons at the helm of the Bulldogs, taking over as the head coach during the 2016 season and finishing with an 8-25 record. In all, Linn spent 19 years with the Bulldogs as he served as an assistant coach in various capacities for 16 seasons.

“We appreciate Andre’s time and service to Union College, especially in regard to the Bulldog football program,” said Curry. “He gave his all to the school and program and want to thank him for all he’s done. We wish him well in his future endeavors.”

Luttrell steps in as the interim after spending his first season on the Bulldog coaching staff, working primarily with the offensive line. This is his second stint on the Union coaching staff as he has also coached at Murray State University and was the head coach for Cawood High School in Harlan.

“With his experience as a collegiate coach and a successful high school coach along with his leadership skills and abilities from his years of service in the military, we look forward to John taking over our program and leading it in the direction we need and want it to go,” Curry said of Luttrell. “We look forward to having John at the helm and are eager to see where he takes the program.”

A resident of Harlan, Luttrell is a Master Mason and an elder of the Harlan Christian Church. He is married to Tracie Morris Luttrell, and the couple has three sons: Justin, Hunter and Michael. He is the son of the late Gurney Luttrell Sr. and Carolyn Luttrell.

The search process for the Bulldogs next head coach is underway.

Pineville advances to second round of 13th Region All…