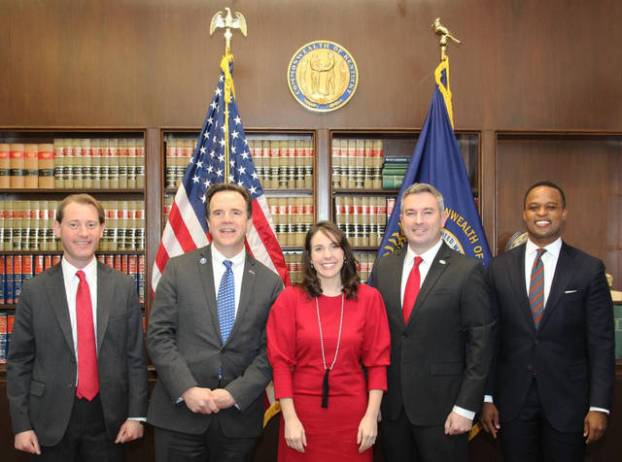 FRANKFORT — Kentucky’s constitutional officers were sworn into their positions in an inaugural ceremony at the State Capitol on Monday morning. Secretary of State Michael G. Adams, Attorney General Daniel Cameron, Auditor of Public Accounts Mike Harmon, Kentucky State Treasurer Allison Ball and Commissioner of Agriculture Ryan Quarles officially began their terms as elected officers upon taking the oath of office. Harmon, Ball and Quarles were sworn in for their second terms, while Adams and Cameron will begin their first full terms in office.

Adams, a Paducah native, is a nationally-recognized election law attorney and has served on the Kentucky State Board of Elections. The Commonwealth’s chief elections official, Adams strongly supports a photo identification law for Kentucky’s elections and vows to clean up the voter rolls.

“Thank you, Kentucky, for the trust you’ve placed in me,” Adams said. “As we open a new decade, we also turn a new page in the Secretary of State’s Office. Joined by a strong staff, now I set forth to implement my platform and enhance Kentuckians’ faith in our election process.”

Cameron is a Hardin County native and the first African American independently elected to statewide office in Kentucky’s history. He is a fierce advocate for the law enforcement community and has pledged to depoliticize the Office of the Attorney General and defend the laws of the Commonwealth.

“I am humbled by the confidence Kentuckians placed in me to serve as the Chief Law Enforcement Officer for the Commonwealth, and I will work every day to be a good steward of their trust,” said Cameron. “As we enter this next decade, our public safety challenges must be met with determination and resolve, and I am committed to tackling the drug epidemic, protecting our most vulnerable, and fighting for a Kentucky that is safer for every man, woman and child.”

Harmon looks forward to continuing the work of bringing good government to taxpayers. His motto, “Follow the Data,” has become synonymous with the work of the auditor’s office, reflecting his objective to operate the office independently, without targeting anyone and without giving anyone a pass.

“During the last four years, my office has made historic strides and shed light on issues to improve how tax dollars are spent. A few examples of this include examinations of the Administrative Office of the Courts, the Kentucky Horse Park, the University of Louisville Foundation, KentuckyWired and transparency compliance concerns with our public pension systems,” said Harmon. “Team Follow the Data has accomplished many things during my first term, but there is more work to be done. I am very appreciative of the people of Kentucky for giving us the opportunity to serve you for another four years.”

A Prestonsburg native, Ball has advanced financial literacy across the Commonwealth and returned nearly $89 million in unclaimed property during her first term, more than any other presiding treasurer in a single term.

“I’m grateful for the last four years as treasurer and I look forward to continue serving Kentucky as a fierce watchdog of taxpayer dollars and making even greater strides in transparency and financial literacy throughout the Commonwealth,” Ball said. “I will continue my commitment to fiscal responsibility and implementing common-sense economic policies.”

“Being Kentucky’s Commissioner of Agriculture has been a dream of mine since growing up on my family’s farm in Scott County, and it is a great honor and privilege to serve for a second term,” he said. “Major priorities for our farm families include expanding markets for our producers, investing in agriculture technology, and promoting agriculture across the state. I look forward to continuing to work for all of Kentucky in the years ahead.”

The new and returning officers were sworn into office surrounded by family and friends at a ceremony that included remarks from Governor Andy Beshear, prayer from Prestonsburg pastor Ron Ball and Elizabethtown pastor Jeffrey Noel and musical performances by Mackenzie Bell, of Horse Branch, Jeremiah Parker, of Campbellsville University, and Miss Kentucky Alex Francke, of Lexington.

According to the Claiborne County Sheriff’s Department, on Jan. 3 during the course of an ongoing Narcotics Investigation led by... read more